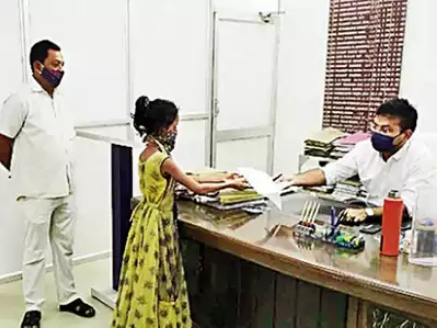 Kendrapada: A minor girl in Kendrapara district trekked 10km to the district Collector’s office to lodge a complaint against her father and stepmother.

The victim, Sushree Sangita Sethi, a student of Dumuka Vidyapeeth in Marshaghai block, has claimed that her midday meal benefits have been taken up by her father for the past few years.

On receiving the minor’s written complaint against her father, Kendrapada collector Samarth Verma directed an official to not only arrange for direct transfer of benefits to her bank account, but also ensure that the money and rice were handed back to her.

While an inquiry has been ordered into the matter, the school Headmaster was asked to provide MDM rice to the girl.

Sushree Sangeeta’s father, Ramesh Chandra Sethi, who got married once again after his first wife’s death, did not take care of her daughter. Since then, she had been staying with her uncle.