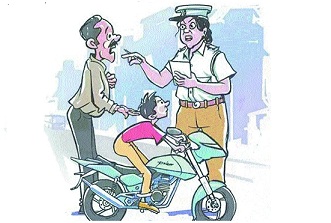 Bhubaneswar: The Commissionerate police here today slapped a penalty of Rs 26,000 on a minor rider of a two-wheeler in Khandagiri area for violating traffic rules.  The accused has been identified as Debashish, son of Amiya Parida from Salepur.

According to available information, the minor was caught by the police while driving the two-wheeler bearing registration number ORO2AG0183 along with a pillion rider. Both were caught riding without wearing helmet.

As per reports, the cops slapped a fine of Rs 1,000 for not wearing helmet and a penalty of Rs 25,000 was issued as the rider was a juvenile.

It is pertinent to mention here that the State Transport Authority (STA) has recently made helmets compulsory for pillion riders and said driving licence (DL) of a rider will be suspended if the pillion rider will be caught without a helmet across the state.