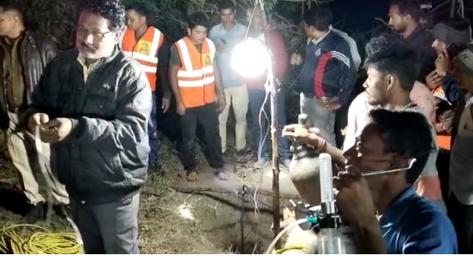 A minor boy fell into a 400-feet deep borewell while playing on a field at Mandavi village in Madhya Pradesh’s Betul district on Tuesday evening at around 5 pm, police said.

The boy has been identified as Tanmay Diyawar (8). He was playing on the field when suddenly he fell into the borewell been dug recently, Aathner police station in-charge Anil Soni told news agencies.

Reportedly, the rescue operations are underway with the help of excavators, the police official said, adding that arrangements have been made to provide oxygen to the boy.

According to reports, SDRF teams rushed from Bhopal and Hoshangabad are on the spot for the rescue operation. The child is stuck at the depth of around 60 feet in the borewell.