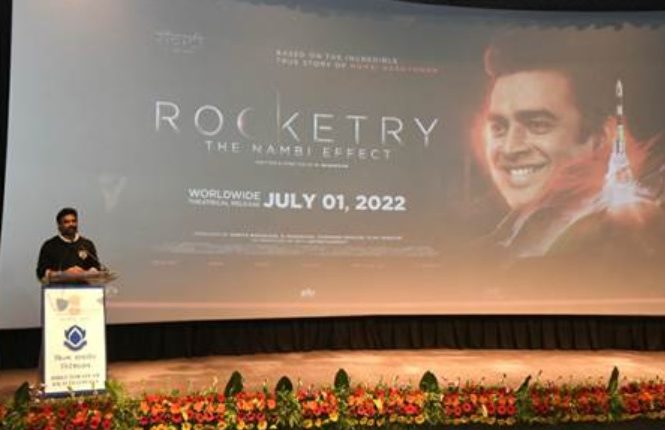 The screening was attended by the team Rocketry led by the writer, producer, director R Madhavan, who is also playing the titular lead role and has made a directorial debut with this movie.

The screening was attended by former Director CBI D. R. Karthikeyan, former IG CBI P.M. Nair, senior officials in the Government of India, and stakeholders from the film industry. The film was applauded by the audience for its script, editing, acting and portrayal of the inspiring story of the life of Shri Nambi Narayanan.

Speaking on the occasion, R. Madhavan said that the film is a celebration of India’s technological prowess across the space and IT sectors. The movie is a tribute to the master Mr. Nambi Narayanan whose ‘Vikas’ engine never failed. It also conveyed the message of India’s soft power skill sets to the world with regard to human resource expertise and scientific excellence.

Rocketry: The Nambi Effect is an upcoming Indian biographical drama film based on the life of real-life scientist Nambi Narayanan, a former scientist and aerospace engineer of the Indian Space Research Organisation, who was accused of espionage in 1994.

The photography of the film took place across several countries including India, Georgia, Russia, Serbia and France. The film was shot simultaneously in Tamil, Hindi and English and will also be released in dubbed versions of Telugu, Malayalam, and Kannada languages. The film is scheduled for a worldwide theatrical release on 1st July 2022.