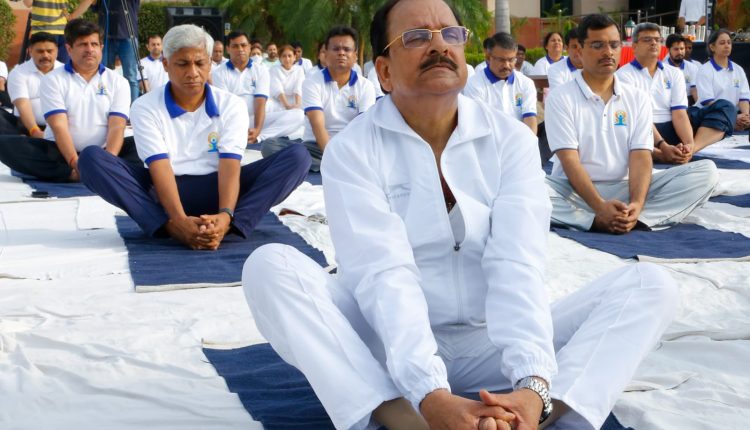 New Delhi: On the occasion of the 8th International Day of Yoga, the Ministry of Defence organized a simultaneous mass demonstration of Yoga at the Defence Accounts Department Headquarters in New Delhi on June 21, 2022, along with the Prime Minister’s Yoga Programme in Mysuru, Karnataka.

In his address, Bhatt hailed the vision of the Prime Minister in bringing Yoga to the forefront of public discourse and encouraged everyone to adopt the practice of Yoga as a way of life. Senior officers and staff of MoD performed Yoga adhering to the Common Yoga Protocol of Ministry of Ayush and under the guidance of instructors from Morarji Desai National Institute of Yoga.  The theme of the IDY is “Yoga for Humanity”.

Integrating the Azadi Ka Amrit Mahotsav with celebrations of 8th IDY, Mass Yoga demonstrations are being organised at 75 iconic locations across the country under the leadership of 75 Union Ministers, along with the Yoga Demonstration by the Prime Minister. The Yoga demonstrations are also being held by various educational, social, political, cultural, religious, corporate and other civil society organizations, attended by large number of people across the country.

The Prime Minister’s Yoga programme at Mysuru and aligned events by various Central Government Ministries as part of the novel programme ‘Guardian Yoga Ring’ which is a collaborative exercise between 79 countries and United Nations organisations along with Indian Missions abroad to illustrate Yoga’s unifying power that surpasses national boundaries.

International Day of YogaMinistry of DefenceYoga at the Defence Accounts Department