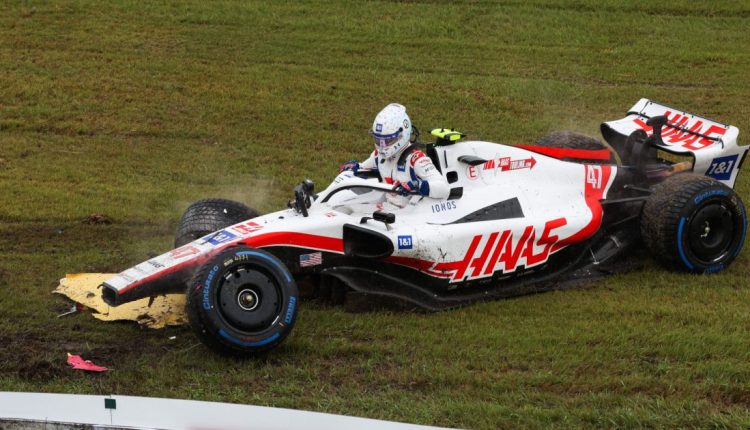 Tokyo: Mick Schumacher will not take part in FP2 at the Suzuka circuit, Haas having to change his chassis after his earlier crash.

Fighting for his Formula 1 career, Schumacher had a great start to the Japanese Grand Prix weekend as he sat P7 when the chequered flag fell at the end of FP1.

His good work came to naught when, on a final lap having ventured back out onto the wet circuit for a practice start, he hit the Turn 8 barrier.

The Haas driver aquaplaned, went into a spin and hit the barrier with the rear and front of his VF-22.

While initially it looked as if only a few repairs were needed, Haas have since reported he requires a new chassis.

The team tweeted: “Mick will be unable to participate in FP2 due to the requirement of a chassis change following his incident at the end of FP1.”

According to Sky Sports’ Ted Kravitz, one of the tyres came back after the impact and cracked the upper section of the chassis.

Meanwhile, Formula 1 cancelled the planned Pirelli tyre test that was due to take place during FP2 as the rain continued to fall.

Formula 1 extended Friday’s second session from the normal 60 minutes to 90 in order to give the teams more time to trial Pirelli’s 2023 dry tyres.

The news was welcomed by Pirelli head of motorsport Mario Isola.

“FP2 will be 90 minutes, not 60 minutes, so we have a bit more flexibility,” he said last month. “In terms of running, it will be very similar to a normal FP2 for them.

“I believe that with the current plan, we have a good solution for the moment.”

Alas, mother nature had the final say, the rain coming down at the Suzuka circuit.

As such, the FIA has announced the intended test will not take place.

“Due to the adverse weather conditions and foreseeable declaration of a wet track in Free Practice 2, the scheduled testing of the new dry-weather tyres will not take place,” said the brief statement.

The session will still be 90 minutes.