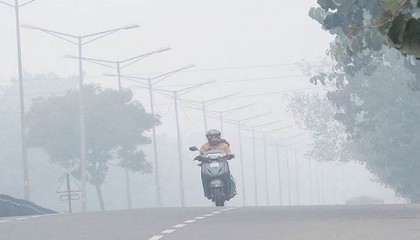 Bhubaneswar: Cold conditions intensified in Odisha on Saturday with the temperature plummeting to 9.5 degree Celsius in Phulbani, making it the coldest place in the state.

Several parts of Odisha are now in the grip of cold wave conditions with mercury dropping below 12 degree Celsius in two places in the past 24 hours, it added.

The Twin Cities of Cuttack and Bhubaneswar recorded minimum night temperature of 16.5 and 17.8 degree Celsius, respectively.

While the temperature has already started falling in many places, it is likely to drop further in different parts of the state, the Met added.

Dense fog has been observed at isolated places across the State.

The visibility in Chandbali was less than 50 mts while vehicular movement was also adversely hit due to a thick blanket of dense fog in Twin Cities of Cuttack and Bhubaneswar.