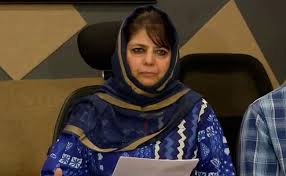 Srinagar: PDP chief Mehbooba Mufti has called for dialogue between India and Pakistan to “curb violence” in the Valley.

Her remarks came in the backdrop of recent incidents of terror attacks on security forces in the Union territory.

The former Chief Minister of J&K met the bereaved family of J&K Police Constable Suhail Ahmad in Kashmir’s Anantnag district who was killed in the terrorist attack in the Baghat area of the city on Friday.

Mufti said the BJP dispensation at the Centre should start talks so that the bloodshed is stopped. She told reporters that the dialogue process could stop the violence.

Mufti, earlier in November last year, had also called India and Pakistan to rise above their political compulsions and initiate dialogue for the good of the region.

Persons over 60 years of age will get Covid jab from March 1: Union Minister