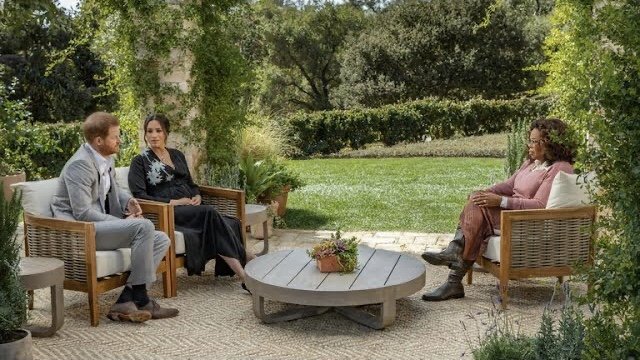 New York: Prince Harry and Meghan, the Duchess of Sussex, sat down with Oprah Winfrey for a set-piece interview.

The bombshell interview was full of revelations: Meghan experiencing suicidal thoughts, the royal family’s concerns about Archie’s race, and the gender of their second child.

The couple made a number of revelations during the interview.

Harry and Meghan actually got married three days before their widely viewed royal wedding. “You know, three days before our wedding, we got married,” Markle told Oprah. “No one knows that. But we called the archbishop, and we just said, ‘Look, this spectacle is for the world, but we want our union between us.'”

She revealed that life within the royal family was so isolating, lonely, and lacking in support that she had experienced suicidal thoughts. She told Harry because “I knew that if I didn’t say it, that I would do it — and I just didn’t want to be alive anymore.”

The couple’s son, Archie, wouldn’t receive a title or security, Meghan revealed — and within the royal family, there were several “concerns and conversations about how dark (Archie’s) skin might be when he was born.” Harry confirmed these conversations — but added that he would never share details about them.

Harry said that, like Meghan, he had also been trapped within the system — but he hadn’t known it. He added that his brother and father were also trapped, and that the royal institution was a stifling environment.

She had been welcomed into the royal family, and said the Queen had been wonderful and welcoming — but beyond that, there was nearly no guidance or support.

Meghan denied the rumors that she had made Catherine, Duchess of Cambridge, cry during her royal wedding. In fact, it was the other way around — a disagreement with Kate had made Meghan cry, she said. Kate has apologized and the issue has been resolved — but the public attacks had been hard to bear with no way of speaking the truth, said Meghan.

Harry had said earlier in the interview with Oprah Winfrey that he loves his brother Prince William “to bits,” despite frequent rumors and speculation of sibling conflict.

Prince Harry told Oprah Winfrey that the past year of freedom has offered new gifts — especially quality time with his son Archie.

Meghan is now looking forward to life after the royal family. This is “just the beginning for us,” she said of their new life in America.