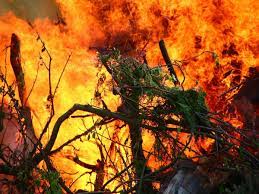 Aizawl: Chief Minister Zoramthanga has sought Central help after massive forest fires have broken out in several parts of Mizoram.

The devastating fire has damaged vast tracts of land and vegetation.

Officials said there were no reports of any human casualty, but said details will be emerging soon. The Chief Minister has requested Indian Air Force for help to contain fire.The IAF is deploying two helicopters to douse the blaze at Lunglei.

Officials said Lunglei is the worst affected and added that the cause of the forest fire will be probed. The forest fire is suspected to be manmade. The three other districts besides Lunglei such as Serchhip, Lawngtlai and Hnahthial are also affected by the conflagration.

Officials said the fire brigade personnel are being assisted by Assam Rifles and Border Security Force as well as local volunteers.

Though the blaze is confined to uninhabited forest region surrounding Lunglei it has spread over to over 10 village council areas within it, the officials said and added that the fire is under control.