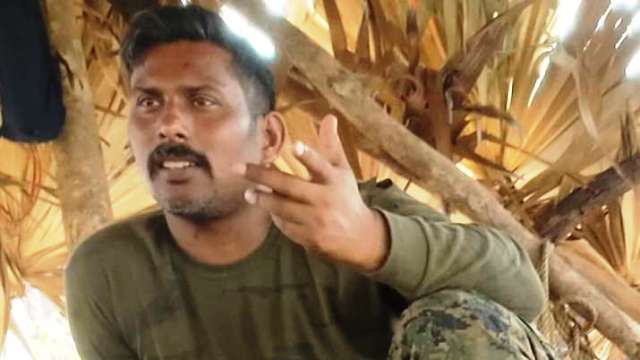 New Delhi: A day after claiming that they abducted a jawan during a recent gun battle with security forces in Chhattisgarh’s Bijapur district, the Maoists on Wednesday released the picture of missing Central Reserve Police Force’s Commando Battalion for Resolute Action (CoBRA) commando Rakeshwar Singh Minhas.

The photo purportedly shows the jawan sitting under a makeshift hut and in conversation with someone in the camp.

CRPF sources said that appropriate action is being taken into the photo of the missing CoBRA jawan released by Naxals circulating in media.

In a two-page statement reportedly issued in the name of Vikalp, the spokesperson of the Dandakaranya Special Zonal Committee (DKSZC) of the CPI (Maoists), it was claimed that the abducted jawan would be handed over to the police after mediation. For this, Maoists sought the nomination of some mediators for Minhas’ release.

In his media reactions, Inspector General of Police (Bastar range) Sundarraj P said: “The authenticity of the statement issued by Maoists claiming that they have held hostage the jawan is being verified. Further action will be taken accordingly.”

In the meantime, the wife of the CRPF jawan said that her family wants the government to look for a mediator so that her husband could be released.

Twenty-two personnel from various security forces like the CoBRA of the CRPF, it’s Bastariya battalion and those from the District Reserve Guard (DRG) and Special Task Force (STF) of the Chhattisgarh Police were killed in the ambush that occurred along the Bijapur-Sukma border on Saturday.

Rakeshwar Singh Minhas belongs to the 210th CoBRA battalion. He went missing after the gunfight that started after a joint team of CRPF and Chhattisgarh Police’s DRG and STF personnel reached the spot following the tip-off regarding the presence of wanted Maoist Madvi Hidma and his associates. Hidma reportedly heads the Peoples Liberation Guerrilla Army (PLGA) battalion no 1.