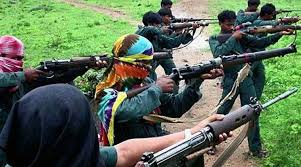 The deceased contractor has been identified as Sukumar Mandal.

Reportedly, the incident took place at a construction site in Goliaguda under Mathili block.

Alleging sub-standard construction of the road, around 15 Maoists set three vehicles, an SUV and a poclain machine, on fire. They also left a poster at the spot warning the administration to stop the construction work.

Meanwhile, combing operation has been intensified in the area.