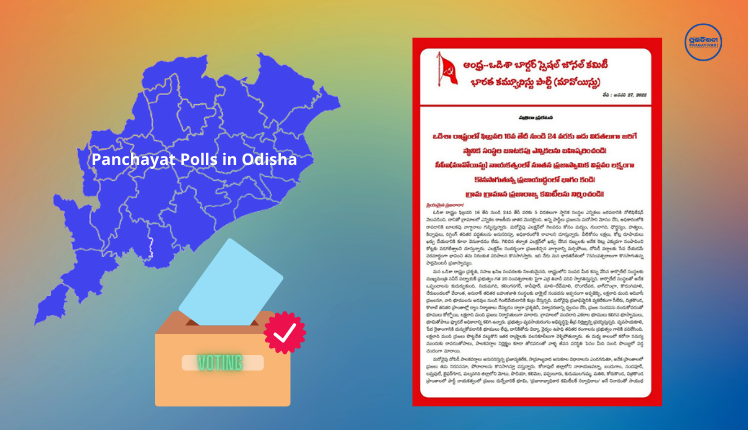 Rayagada: The Maoists have appealed to the people of Rayagada to boycott the ensuing panchayat elections. Ganesh, secretary of the Andhra-Odisha Border Special Zonal Committee (AOBSZC), on Sunday issued a press note targeting the state government.

“The government does not pay attention to the development of education and agriculture. Unemployment is also on the rise. The law and order situation has deteriorated due to the unabated sale of alcohol. The government has failed to provide jobs to migrants during the COVID period, leaving people financially vulnerable,” the Maoist note read.

“The government is not paying attention to the development of villages along the Andhra-Odisha border. As Odisha is rich in natural mineral resources, the government is relocating the indigenous population to clear the part for industrialists to mine the resources. For the past 20 years, the state government has sold mines in Niyamgiri, Kalinganagar, Deomali, Dangdeula, Baghdangari, and Kodingamali in Odisha,” the note mentioned.

Stating that the government’s policies are against the poor, Maoist leader Ganesh has called to boycott the three-tier elections to PRIs to be held from 16th to 24th February 2022.

Such a letter from the AOBSZC has become a matter of concern for the district police. In Rayagada district, Maoist activities have been declining, while the Bansadhara-Ghumsar-Nagavali (Baghuna) division has been actively operating. In the Maoist-affected areas of the district, banners and posters have been used to inflict violence on some areas.

AOBSZC secretary, Ganesh, issued a letter today proving that the Maoist organization is active again on the Andhra-Odisha border.

With the voting dates for panchayat elections approaching fast, security of sensitive booths in the Maoist-affected regions of Kashipur, Muniguda, Chandrapur, Gudari, Bisamakattak, and Kalyansinghpur blocks in Rayagada district will remain a challenge for the police and administration.