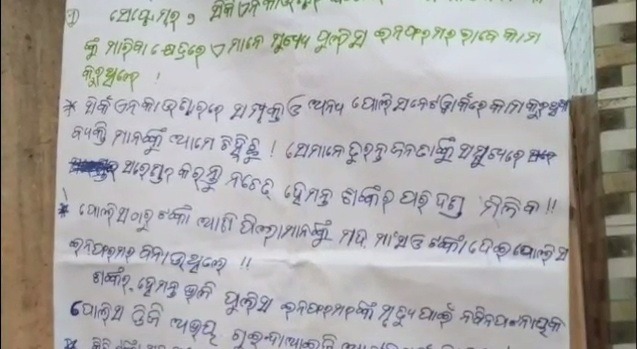 Phulbani: Maoist posters have again surfaced in Tumunibandha area in Kandhamal district on Tuesday. The Ultras have pasted the posters in Jhirpani panchayat.

Thorough the posters, the red rebels have warned the people of Gond society not to be police informers or else they will have to suffer the same fate as Hemant and Bhawani.

Worthwhile to mention that the red rebels had kidnapped the son of Bhandarangi panchayat on January 29  and subsequently killed him in cold blood. The Maoists have also abducted two persons from the same panchayat but later freed them after holding them captive for over 24 hours.

Maoist posters in the area have instilled a sense of insecurity among the people as they feel disaster will let loose on them.