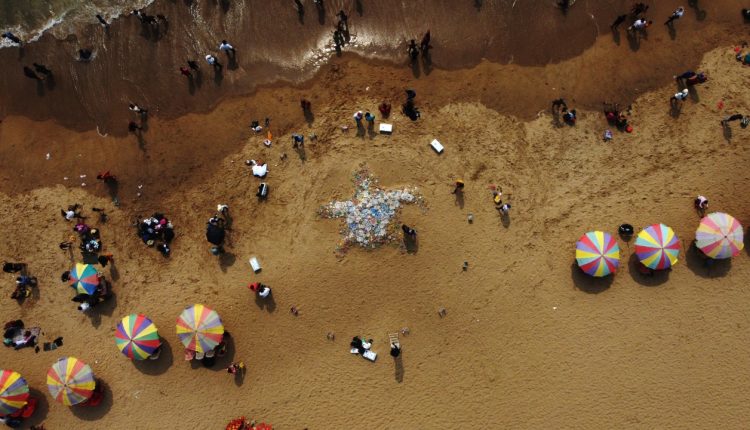 Bhubaneswar: For the visitors on the Puri’s beach the sight of a 15-feet long turtle since early morning today till the evening was a delightful sight. However, the big art work made from layered plastics by Delhi-based artist Manveer Singh was a collage of 250 small turtles of the waste plastic with a message on the ever increasing level of plastics in the sea water.

Interestingly, the visitors on the famous golden beach of Puri, who halted for a moment and had a look at this beautiful work, also got the message on the great menace which might rise to a dangerous level by 2050.

With more than 5,000 people viewing Manveer’s impressive work on the beach near the Digabareni Point, the mythic structure representing the Olive Ridley sea turtles has a story to tell every visitor. 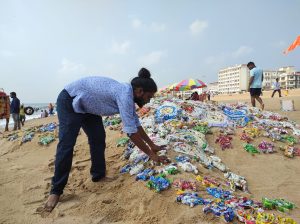 The artist, who has won the “METIS Initiative on Plastics and Indo-Pacific Ocean 2021” Residency of city-based Utsha Foundation for Contemporary Art, explained: “Odisha has a special link with the Olive Ridley sea turtles and its long coast is famous across the globe for many mass nesting sites. However, with the plastic level rising in the sea water day-by-day, my work at Puri beach today showed the tragedy which is likely to happen as the baby turtles might not feel safe to go to the sea once they hatch. The work of mine is thus a loud message to make people aware of the pollution being originated from plastics and how we could play our tiny roles to contain it. I have used the mythical symbolism of Olive Ridley as its connection with Odisha’s coastline is well recognized”.

Abhimanue VG, artist and retired Associate Professor of Art from Vadodara, who visited the installation on Puri beach today, said” “It is interesting to see and experience Manveer’s public installation today.”

“The sculptural installation using waste plastic is not non-recyclable and thus Manveer has clearly conveyed his message regarding the environmental issues to the public. Moreover, it was an experience for me as his professor when he was doing his MFA in painting at the College of Art, New Delhi. As I was visiting Odisha to know more about the art tradition and culture here, to see Manveer and his work was an opportunity for me to explore.”

Venkatesh(20), a local seller at Puribeach said: “We never realized that the plastic pollution could affect the marine life in such a way. From the artist’s work many people could get to know the dangerous situation ahead and it could only improve if we work towards it.”

ChinmayRanjanNayak, (23) a practicing artist and student of BK College of Art said: “The plastic pollution in the marine environment is going to endanger every form of life. Manveer’s work relating to the Olive Ridley is only a tip of the iceberg. Plastics have also influenced livelihood of fishermen communities. We all have to be extra cautious to end the menace across the globe.”

Manveer, currently staying at Utsha Foundation,Bhubaneswar, for his residency will also display his final work on November 28 in the Temple City as his programme at Utsha is being organised in collaboration with the French Development Agency (AFD).Manveer’s entry was selected from 26 applicants. His project “From Plastic to Art” was chosen during September last.

The METIS initiative is part of the AFD celebrating its 80th Anniversary on December 2, this year and for this, the agency has planned events across the Indo-Pacific Region. AFD has decided to launch a global initiative METIS, to create a global public opinion on marine debris and pollution.

Currently, AFD is funding the City Investments to Innovate, Integrate and Sustain (CITIIS) Programme in Bhubaneswar and 11 other cities of India through the Smart City Mission. AFD is funding CITIIS Programme, supported by Ministry of Housing and Urban Affairs, European Union and National Institute of Urban Affairs, New Delhi and the Government of Odisha.

Hate Going To The Gym? Try These Exercises At Home