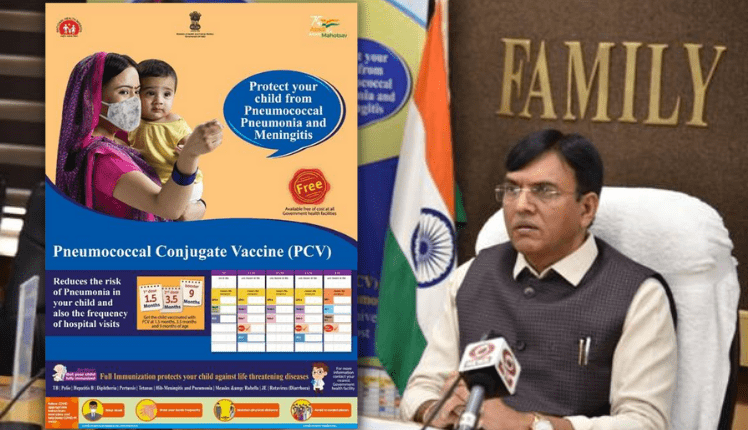 The Union Minister also released communication and awareness packages on PCV to create widespread mass awareness. These communication packages will be shared with all States/UTs for further adaptation and utilization.

Addressing the nation-wide rollout, the Union Minister said that it is for the first time in the country that PCV will be available for universal use. He added that Pneumonia is a leading cause of death among children under-5 years old, globally and in India.

“Pneumonia caused by pneumococcus is the most common cause of severe pneumonia in children. In India around 16 percent of deaths in Children occur due to pneumonia. The nationwide rollout of PCV will reduce child mortality by around 60 percent”, the Health Minister stated.

Highlighting the importance of healthy children in any country’s growth, productivity and development, the Union Minister said that “Children are the future of our country and it is our responsibility to provide them a healthy life. Mission Indradhanush which was launched by the Hon’ble Prime Minister is one such endeavour in this regard. The vision of “Sabko vaccine, muft vaccine” by the Hon’ble Prime Minister guiding the COVID19 Vaccination programme has ensured that the eligible population gets access to the COVID19 vaccines across the country.” He added that the launch of PCV will further ensure healthy growth and development of our children, apart from reducing child mortality.

The Union Health Minister congratulated all the immunisation staff, health care workers and the officials for their efforts in the roll out of this life saving vaccine. While releasing the Communication Package for the vaccine, Dr. Mansukh Mandaviya exhorted that creating awareness regarding the vaccine is a vital component. The objective of the vaccine is to save the lives of our children and this would be possible if we run a  successful awareness campaign across the country.

Actor Puneeth Rajkumar Passes Away At 46