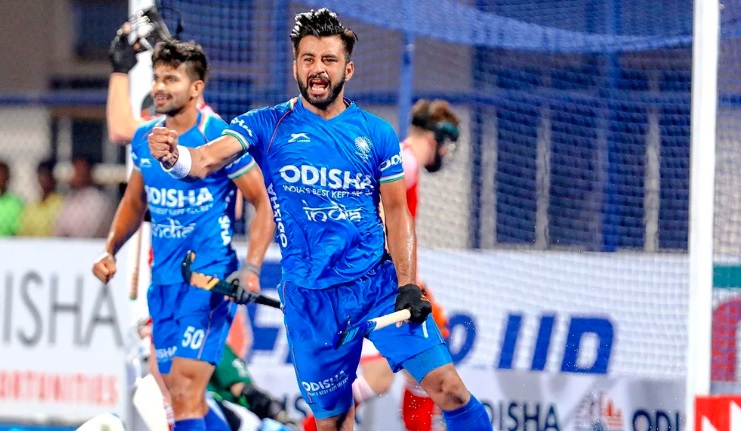 New Delhi: With exactly 100 days to go for the FIH Odisha Hockey Men’s World Cup 2023 Bhubaneswar-Rourkela, the hockey fever is slowly starting to rise in our country. The best of the best hockey players will make their way to India to fight it out for the coveted World Cup trophy. The Indian Men’s Hockey Team, who won the Silver medal at the Birmingham 2022 Commonwealth Games, is eager to continue their great form and finish the FIH Odisha Hockey Men’s World Cup 2023 Bhubaneswar-Rourkela as Champions.

The Indian Men’s Hockey Team Captain Manpreet Singh said, “This is a very exciting time for us. There are only 100 days to go for the World Cup. We have been working very hard for this tournament and we are eager to perform for our country. Hopefully, we can go on and win the biggest hockey tournament in the world. We have performed consistently since the Olympics and we will look to continue our form in the World Cup.”

Meanwhile, the Indian Men’s Hockey Team Vice-Captain Harmanpreet Singh expressed, “We cannot wait for the World Cup to begin. Our team has grown manifold in the last few years and it’s time to play to our full potential and win the FIH Hockey World Cup for India. We have been working on all the aspects of our game that we need to improve and I feel we will put up an even better performance in this edition of the World Cup.”

The FIH CEO Thierry Weil also expressed his excitement for the IH Odisha Hockey Men’s World Cup 2023 Bhubaneswar-Rourkela, “It really is exciting that the FIH Odisha Hockey Men’s World Cup 2023 Bhubaneswar-Rourkela is only 100 days away! We’re looking forward to outstanding matches in the iconic Kalinga Stadium of Bhubaneswar and the brand-new Birsa Munda Stadium in Rourkela, which will be a fantastic legacy for hockey, not only for India but for the world. On behalf of FIH, I’d like to renew our thanks to Hockey India for putting together what will for sure be a memorable event, our best wishes to all teams and our invitation to fans to come to the stadium in numbers or watch the matches on TV or on Watch.Hockey. Don’t miss the show!

Sports Minister, Odisha, Tusharkanti Behera, shared, “With just 100 days to go, Hockey craze is at an all-time high in the state. The excitement is building up, especially in Rourkela where a Hockey World Cup will be hosted for the first time. At both Bhubaneswar and Rourkela, preparations, in all aspects, are going on in full swing. Odisha eagerly awaits to welcome the teams and along with FIH & Hockey India is confident of putting up a spectacular World Cup.”

Hockey India President Dilip Tirkey said, “Hosting the FIH Odisha Hockey Men’s World Cup 2023 Bhubaneswar-Rourkela is a huge honour for us and we cannot wait to welcome the world’s top hockey players to India. All the preparations for the tournament are on track and we are very excited to organize the biggest hockey tournament. I would like to invite all the hockey fans to Bhubaneswar and Rourkela to witness the high-octane action between the world’s best sides.”

The Indian Men’s Hockey Team will take on Spain in their first match of the FIH Odisha Hockey Men’s World Cup 2023 Bhubaneswar-Rourkela at the newly-built Birsa Munda International Hockey Stadium in Rourkela on 13 January 2023.