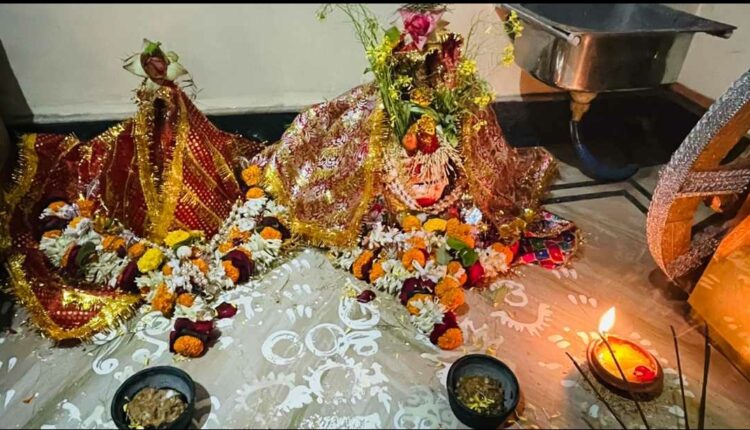 Odisha worships Goddess Laxmi on Gurubar (Thursday) during the lunar month of Margasira.

In the religious calendar of Odias, ‘Manabasa Gurubar’ holds a prominent place. The festival involves worship of Goddess Lakshmi on every Thursday of ‘Margasira’ month which begins just after Kartika Purnima. Manabasa Gurubar is celebrated with the belief that Lakshmi, the Hindu Goddess of wealth and prosperity, visit people’s homes in this month. The harvested paddy crops of Kharif season are worshipped and people pray for their families’ well-being.

The Legend of Manabasa Gurubar is based on the ancient scripture “Laxmi Puran”. In ancient time, the untouchables were not allowed to pray, worship and do rituals to God in the ancient ages. But Shriya, a scavenger low caste woman, dared to pray and worship and appease the Goddess, who then visits her.

This act, however, angers Balaram, the elder brother of Jagannath, and she is turned out of Jagannath Temple, Puri, at his behest.

The Goddess is shown the door for ending discrimination on earth by encouraging even untouchables to conduct rituals and worship. While leaving the temple, she curses her husband and elder brother-in-law saying that they would have to go through a prolonged ordeal without food, water or shelter.  The curse of Laxmi has a severe impact on both the brothers for 12 years and they had a tough time. Soon they realise her importance and Laxmi agrees to return but on one condition that there will be no discrimination of caste and creed on earth.

The Purana raises voice against the evil practice of untouchability in society. It also stresses on the importance of feminism and empowers the female to resist male hegemony.

Visakhapatnam: Maoists kill tribal man suspecting him to be a police informer