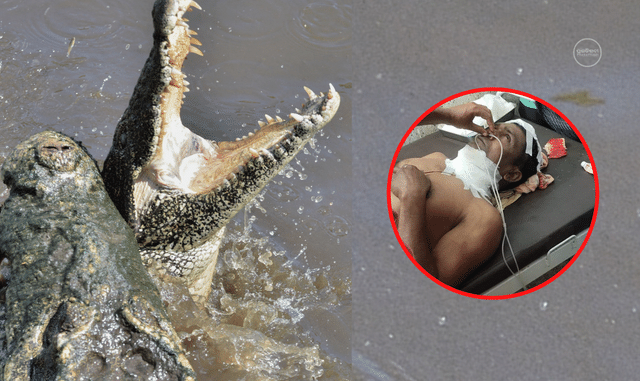 Rajknika: A man managed to escape from a crocodile attack with critical injuries in Badajoramuha village in Bharigada panchayat under Rajkanika block in Kendrapara district.

Reportedly, the victim, identified as Nityananda Patra, 45, sustained severe injuries on his neck and face in the crocodile attack and is undergoing treatment at SCB Medical College and Hospital in Cuttack.

According to reports, Nityananda had gone to wash his hands and legs in the Kharasrota river near his house at around 10 pm on Saturday when the reptile all of a sudden pounced on his neck and dragged him to the deep water.

Nityananda survived the crocodile attack with deep wounds on his neck and face. He was initially admitted to Aul Community Health Center and later shifted to SCBMCH in Cuttack as his condition was critical, family sources said.

It may be mentioned here that the Bhitarkanika National Park and the adjoining Mahanadi deltaic region are home to more than 1,500 saltwater crocodiles. Lethal assault by the reptiles remains a regular feature in this part of the state.

Loss of human lives is most frequently recorded during the monsoon and winter months, the nesting season of the estuarine crocodiles. Often, the mishaps occur when the victims intrude into the animal habitats, for illegal fishing, poaching, wood collection and honey collection. The animals, in the wake of depleted food reserves in the river system, stray into nearby rivulets and nullahs.