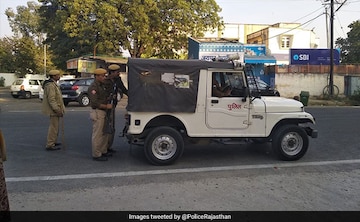 Rajasthan: Tensions prevailed in Rajasthan’s Bhilwara district on Thursday after a man was shot dead and another was injured by unidentified bike-borne assailants. The police had to impose a 48-hour shutdown on internet services after people took to the streets in protest over the murder.

The victims have been identified as Imamuddin alias Tony and Ibrahim Pathan alias Bhura.

They were heading towards the Harni Mahadev area at around 4.30 am when four people came on two bikes and fired at them. Ibrahim died on the spot after being hit by a bullet. On the other hand, Tony got injured.

The miscreants fled the spot. The police reached the spot and took both victims to the Mahatma Gandhi Hospital. Ibrahim was declared brought dead on arrival at the hospital.

The police are suspecting it to be a case of revenge killing as both the victims were related to Mohd Sahil Mansuri, the main accused in the Adarsh Tapadia murder case. Tapadia was killed in May this year, which led to unrest in the area.

The victims’ relatives and others created a ruckus at the hospital and vandalised the property. Later, police reached the spot and dispersed the crowd.

Heavy police deployment has been done in the area to catch the culprits.

International Day for the Elimination of Violence against Women: History, significance