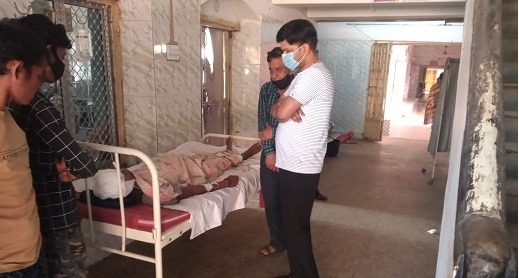 Man injured after being hit by Collector’s vehicle in Deogarh

Deogarh: A man was critically injured after being hit by the Deogarh district collector’s vehicle at Palasama village under Khuntei police station limits in the district today. The injured person has been identified as Ravi Baghar (40).

According to available information, the incident took place at around 12pm when Ravi was heading towards the pond on his bicycle for a bath. Meanwhile, the speeding vehicle bearing registration- OD 28A 0689 moving towards Angul from Deogarh hit Ravi near the pond leaving him critically injured and fled from the spot soon after the mishap. Immediately, locals rushed to rescue Ravi and informed the police about the matter.

On receiving information, police reached the spot and shifted Ravi to Deogarh District Headquarters Hospital. Following the accident, the vehicle’s registration number plate fell down which helped the locals know about the details of the vehicle.

Irate over the mishap, villagers blocked the Ranchi-Vijayawada national highway passing through Palasama village after they came to know that Ravi was hit by the Collector’s official vehicle.

Later, the district collector came to Deogarh DHH to inquire about the condition of Ravi and promised to provide financial assistance for the treatment. The villagers lifted the roadblock after police arrived at the scene to investigate.