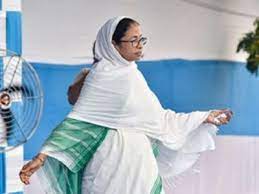 Adhikari, a former aide to Banerjee, was leading for the most part of the morning.

Mamata Banerjee is likely to return as the Chief Minister for the third consecutive term with the TMC leading in over 200 seats, while the BJP’s lead has slipped to 88 seats, as per early trends.

Counting of votes for the West Bengal Assembly elections began at 8 am on Sunday amid strict health protocols, as it is taking place amid a raging second wave of COVID-19.

Mamata Banerjee’s Trinamool Congress has crossed the half-way mark in early leads in Bengal and is leading in 202 seats, though the BJP seems to have made gains since the 2019 national elections. The Chief Minister’s Trinamool and the BJP ran a bitter, no holds barred campaign that defied Covid safety rules as well as the poll code.