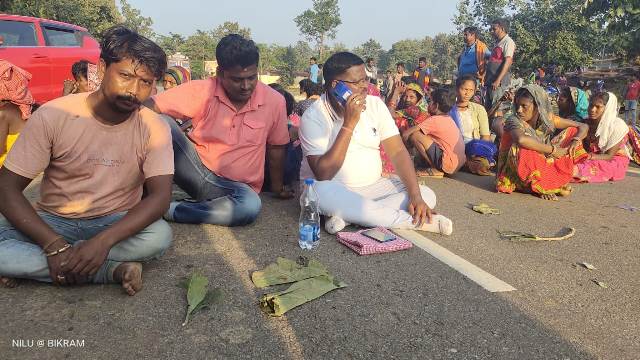 Malkangiri: Hundreds of people on Sunday staged a road blockade on NH 326 near Kotamata in the district alleging fake encounter by police in Baipariguda that had taken place late on November 10 night.

The protesters including the family members of the deceased alleged police had killed two civilians branding them as Maoists.

They demanded Rs 30 lakh compensation to the bereaved families and their dead bodies.

On the intervening night of November 10, police and other security forces had fired at two persons while they were transporting ganja in Maliguda forest. They died in the police firing, protesters alleged.

The deceased have been identified as Dhana Kamar (41) from Saragiguda in Malkangiri and Jaykumar Nag of Nuaguda in Nabarangpur district.

The agitators alleged that the duo was murdered by the police even as they had no links with the naxals. Their families need to get adequate compensation as the lone bread winners were shot dead by the security forces, the protesters demanded.

Vehicular communication came to a grinding halt on the highway for quite sometimes due to the blockade. A number of vehicles stood on the road for hours due to the agitation.