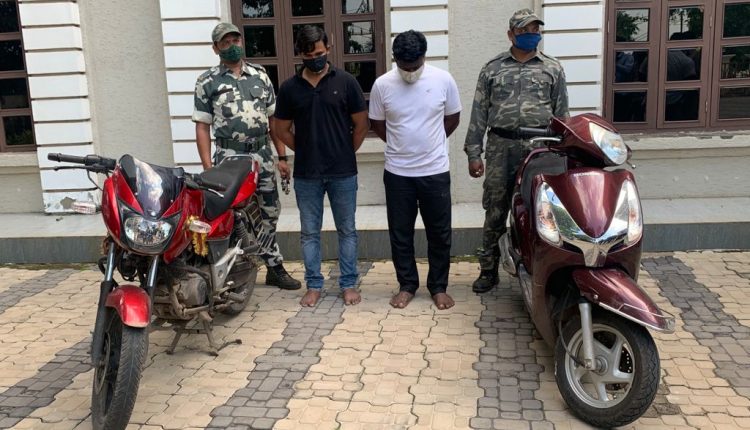 Cuttack: Continuing its crackdown on the persons accused in the murder of a pulses trader in Cuttack’s Malgodown, Md. Farook Tayab, Cuttack Police on Thursday arrested three more persons involved in the case.

The arrested accused were identified as Chandan Behera (35), of Mangalabag Machhuabazar, Lala alias Lalan Kumar Gupta (35), of CDA Sector-7, and Raja alias Ranjan Behera (24), of Lalbag Alisha Bazar in Cuttack. Police have also seized a motorcycle, used in the crime, from accused Chandan.

Earlier on Wednesday, police had nabbed hardcore antisocial Sankar alias Deepak Kumar Nayak, another accused in this case, after a long chase of seven years with the seizure of one country-made pistol and two live ammunition. He has been forwarded to the Court.

During the initial investigation, police had arrested four accused in this case identified as Md. Sakil, Sk. Babu, Sk. Sona and Asit Kumar Das. They were forwarded to the Court on 30th November 2014. Thereafter on subsequent investigation, three hardcore criminals including gangster Dhalasamanta Brothers (Sushanta & Sushil Dhalasamanta) and Arif Khan were remanded in Judicial custody on 8th April 2016 on being arrested in Chauliaganj PS Case No. 12/2016.

The murder of the established businessman in Malgodown was committed as per direction of the Gangster Dhalasamanta Brothers under conspiracy by engaging his hardcore associates and the motive behind the crime was “SUPARI”, said the police.

On 12 November 2014, miscreants shot Mohhamad Farook Tayab, an established pulses trader in Cuttack Malgodown, while he was sitting at his shop as he had refused to pay extortion money.

BTS In the Soop returns with Season 2 in October