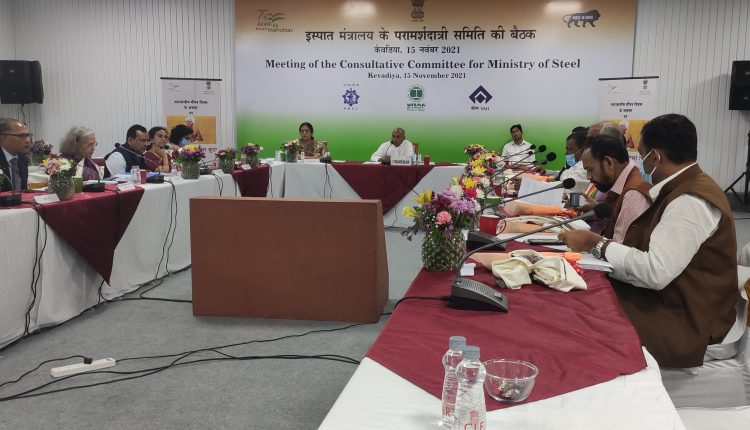 Make In India, Gatishakti Schemes Likely To Be Critical Drivers Of Growth In The Sector: Steel Minister

New Delhi: A meeting of the Consultative Committee of the Members of Parliament for the Ministry of Steel was held today at Kevadiya, District Narmada in Gujarat on the subject “Steel Usage”.

The meeting was chaired by the Minister of Steel Shri Ram Chandra Prasad Singh.

Welcoming the members, the Minister said that Steel has been playing an important role in the industrial development of India, as it is a key input for critical sectors such as Infrastructure, Construction, Engineering & Packaging, Automobile, and Defence.

India has become the world’s second-largest producer as well as consumer of steel. During the financial year 2020-21, the total finished steel consumption in the country was 96.2 Million Tonnes and is expected to reach about 160 Million Tonnes (MT) by 2024-25 and about 250 MT by 2030-31.

The Government is continuously making efforts to enhance steel production capacity domestically and at the same time increase domestic demand and usage of steel.

The construction and infrastructure sectors are major consumers of steel and will continuously be the driver of increased consumption of steel.

The Government’s recently announced GatiShakti Master Plan will complement the Rs. 100 lakh crore investment plan for infrastructure development over the next five years. This will further give boost to steel usage in the country.