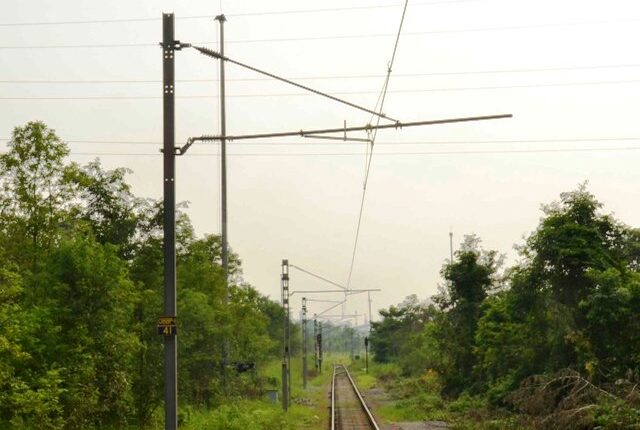 Notably, the phase one of the OHE project was executed for Track Hopper-1, 2 & 3 route of OBBP from Bondamunda Exchange yard and Marshalling Yard railway tracks connecting with Bondamunda (BNDM). The 25 KV OEP being carried out by the Projects Department, is a part of the Rail Infrastructure Project catering to Modernisation and Expansion Project of RSP. M/s RITES Ltd is the Project Management Consultant for the work. The project is being carried out in coordination with South Eastern Railway engineers.

The 25KV Power for the commissioning of the OHE was provided through Sub Sectioning Post (SSP) at J-Cabin, Bondamunda Exchange Yard of Indian Railways. Rail track up-gradation work with 60 KG Rail and PSC Sleepers in Electrified tracks was completed for the purpose. All the works were carried out without affecting normal traffic movement of both inbound and outbound Locomotives to maintain the production level of RSP and also to keep the demurrage parameter under control. Necessary support for completion of rail track up-gradation and OHE works has been extended by Traffic and Raw Materials Department.

The completion of OHE work has facilitated the operation of Electrified locomotives of Indian Railways under Engine On Load (EOL) scheme in the section. OHE works of NCCY had also been completed and the section is expected to be energized shortly. After electrification, the pilot exchange between Railway and RSP which is being done presently at BNDM will be shifted inside RSP. It will increase Diesel Locomotive availability inside RSP and also help reduce Demurrage substantially.

It is worth mentioning here that RSP Loco Engines used to pull the loaded rakes from Bondamunda Exchange Yard to different unloading facilities at Ore Bedding & Blending Plant (OBBP), New Coal & Coke yard (NCCY) and Coke Ovens Department of the plant in the earlier system. After the introduction of ‘Engine-on-load’ (EOL) system in the Indian Railway, the Railways Electric Engines became an integral part of the rake. However, due to non-availability of OEP, an RSP Diesel locomotive engine had to pilot the wagons along with the Railway Engine. Notably, the demurrage charge of EOL system is much higher than its earlier system. Hence RSP took up the OEP job on a priority basis to facilitate direct entry of the Railway Electric Engines to the unloading points without the need of RSP pilot diesel engines.

The new system is expected to help RSP to improve logistics and save substantial cash outflow in terms of demurrage. It will also facilitate better rationalisation of resources.