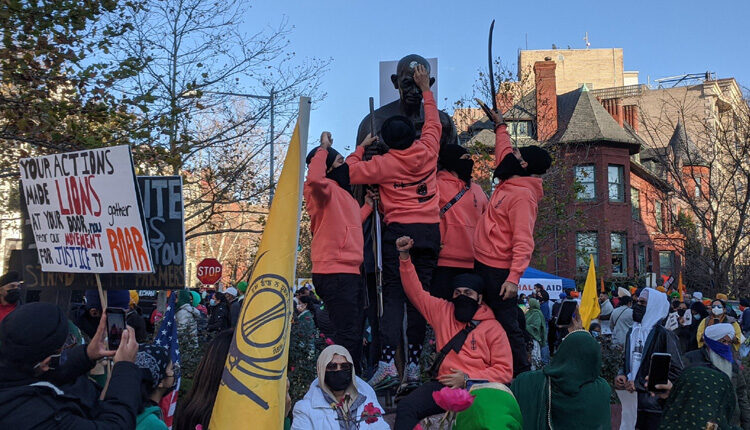 Washington: The members of Khalistani separatists desecrated the statue of Mahatma Gandhi during a protest organised by Sikh-American youths in support of farmers who are protesting against the recently enacted agri laws in India.

A car rally was carried to the Indian Embassy in downtown Washington, DC.

Hundreds of Sikhs from in and around the Greater Washington DC area, Maryland and Virginia, along with many from other states like New York, New Jersey, Pennsylvania, Indiana, Ohio and North Carolina had gathered to express solidarity with the protesting farmers.

However, the peaceful protest was soon hijacked by the separatist Sikhs who were carrying Khalistani flags with anti-India posters and banners which said they represent “The Republic of Khalistan”.

During the protest, many of the pro-Khalistan Sikh youths flashing Kirpans jumped on the statue of Mahatma Gandhi and pasted a poster over it. The group was raising anti-India and pro-Khalistan slogans.

The Indian Embassy condemned the mischievous act by hooligans masquerading as protesters.

“The statue of Mahatma Gandhi at the Mahatma Gandhi Memorial Plaza in front of the Embassy was defaced by Khalistani elements on 12 December 2020. The Embassy strongly condemns this mischievous act by hooligans masquerading as protesters against the universally respected icon of peace and justice,” it said in a statement.

The Embassy said it has lodged a strong protest with the US law enforcement agencies and has also taken up the matter with the Department of State for an early investigation and action against the culprits under the applicable law.