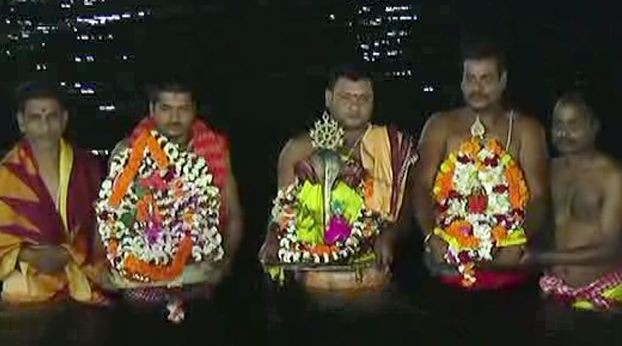 Konark: Magha Saptami is a highly auspicious day observed on the seventh day (Saptami Tithi) of Magha, Shukla Paksha (brighter phase of the Lunar cycle). Both Sun God and Lord Shiva are worshipped during the ‘Magha Mela’ which is held at Konark on this day also.

The holy dip rituals on the occasion of Magha Saptami were conducted at the Chandrabhaga beach in Konark today. However, devotees missed the opportunity to witness the rituals due to the coronavirus-induced restrictions that are imposed here.

As per the tradition, at around 4.30 am, the three presiding deities of Konark – Tribeniswar, Ishaneswar and Dakhineswar, all forms of Lord Shiva, were escorted on palanquins by servitors from their temples to Chandrabhaga where they were given a customary bath.

Later, servitors were allowed to take bath in the sea following which the Bahuda Yatra, the return journey of the Lords was performed.

Four section forces have been deployed around the pond for security. One additional SP, five DSPs, 14 IICs, 60 AICs and 200 home guards. Three exhaustive traffic arrangements have been made.