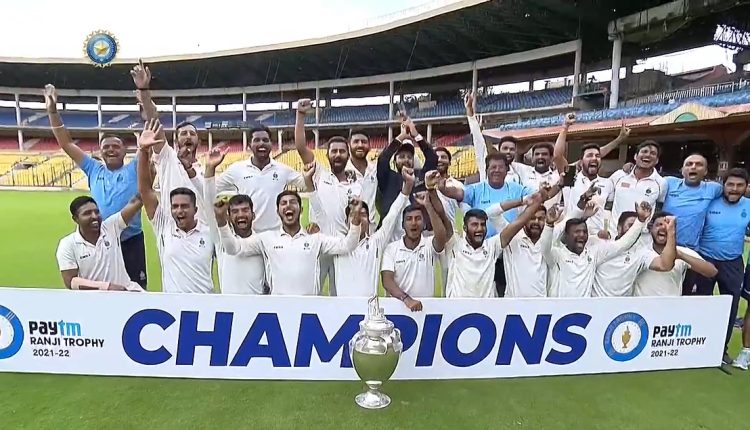 Bengaluru: Madhya Pradesh scripted history on Sunday in Bengaluru as they won their first-ever Ranji Trophy title defeating 41-time champions Mumbai in the final by 6 wickets at the M Chinnaswamy Stadium.

Rajat Patidar, who is fast-rising to be one of the prominent names in Indian cricket, hit the winning runs as Madhya Pradesh chased down a 108-run target on Day 5 of the final. MP lost 4 wickets but Patidar kept a calm head and hit the winning runs, sending the players into a frenzy.

This was also Madhya Pradesh’s first outright win over Mumbai in a Ranji Trophy match as their bowlers did a fantastic job, bowling out Mumbai for 259 on the final day before their batters brushed aside an ordinary total.

Ranji Trophy has had 4 first-time winners in the last 5 seasons as Madhya Pradesh join the likes of Saurashtra, Vidarbha and Gujarat.

In front of a considerable crowd in Bengaluru, the Madhya Pradesh players celebrated with their coach Chandrakant Pandit leading the team huddle. Notably, it was Pandit who led Madhya Pradesh to their first final in the 1988-89 season but they lost to Karnataka in Bengaluru. 23 years later, it was under his watch that MP won the title.