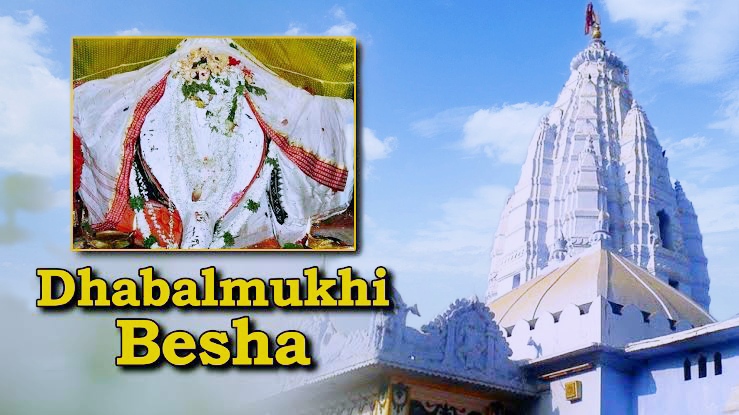 Sambalpur: Thousands of devotees thronged Samaleswari temple in Sambalpur city to have a glimpse of ‘Dhabalamukhi Besha’ of the Goddess Samaleswari, the presiding deity of undivided Sambalpur district on the occasion of Mahalaya.
.
Maa Samaleswari remains dressed in red costume round the year except on Mahalaya when it changes to white. The ‘Dhabalamukhi Besha’, also referred to as ‘Ganga Darshan’. It is believed that the darshan of the Goddess in the Besha is as good as taking a holy dip in the Ganga.

According to the information, darshan of the Goddess has been allowed from 6 am to 7.30 pm. Preparation for this ‘Besha’ started in the midnight following which the doors of the temple were opened at 5.30 am for the devotees for ‘darshan’. The devotees waited for the day with all devotion to take a glimpse of the Goddess since morning. They lined up in long queue to enter into the temple.

During the Navaratra, the Maa Samaleswari would be adorned with different Beshas like Sailaputri, Brahmacharini, Chandraghanta, Kusumanda, Skandhamata, Katyayani, Kalaratri, Mahagouri and Raja Rajeswari. During these nine days, the temple also witnesses huge turnout of devotees from Odisha and neighbouring States.

Mahalaya, which marks the beginning of Durga Puja celebrations, is here. It is observed at the end of Shradh or Pitru Paksha, a 16-day period when Hindus pay homage to their ancestors. This year, this special day is falling today (September 25). After Mahalaya, Navaratra Puja continues for nine days in Samaleswari temple. The shrine witnesses huge footfall during these nine days as people come to light ‘Akhanda Deepa’ during Navaratri.

Mahalaya is all about the beginning of Durga Puja fun. Generally, people believe that on this day, Goddess Durga officially begins her journey from Mount Kailash — where she resides with her husband Lord Shiva — to her maternal home on Earth. As per the Hindu calendar, the celebrations of Mahalaya begin a week before the Durga Pooja celebrations.