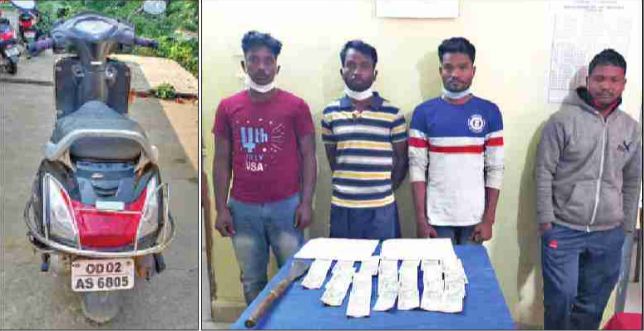 Bhubaneswar: Commissionerate Police have busted a notorious looters’ gang with the arrest of four persons from Balianta area here.

Besides, the cops have also seized Rs 10,000 cash, a scooter bearing registration number OD02-AAS-7805 and a sharp weapon from their possession.

According to sources, the accused persons, identified as Sahir Sameer Bhoi (25), Rakesh Bhoi (24), Rajendra Bhoi (23), and Santosh Behera (23), were arrested following a complaint by one Trinath Swain, an employee of a private finance firm.

Reportedly, on November 23, Swain was on his way for some work when the accused persons chased him and looted a bag containing cash and some important documents. Following this, Swain approached Balianta PS and lodged a complaint in this regard.

Based on the plaint, police registered a case and launched a probe into the incident. However, all four accused persons involved in the case were apprehended during a raid.

During interrogation, the accused persons confessed to the crime, sources added.