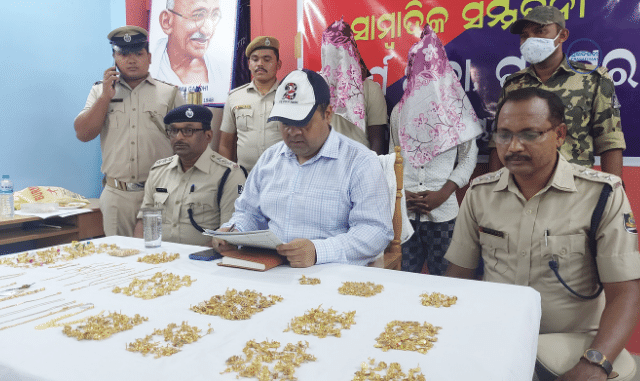 Gunupur: Police have arrested two persons and seized around 1.4 kgs of gold ornaments that were looted from the owner of a jewellery shop at Gunupur in Rayagada district on 26th April.

Addressing a press meeting at Gunupur SDPO’s office here today, Rayagada SP Vivekanand Sharma said that of the 3 kgs of looted gold ornaments, around 1.4 kgs have been recovered and two persons have been arrested so far in this regard.

“The two arrested accused were identified as Arjun Pradhan of Jajpur and Tarun Das of Bhanjanagar in Ganjam district and one Bajaj Pulsar bike has been seized from them, the police official said and added that a cash amount of Rs 2 lakh that was looted along with gold ornament could not be recovered.

“Both the accused have been forwarded to the court and meanwhile efforts are underway to nab others involved in the racket and recovery of the remaining gold ornaments,” the SP said.

“Three teams, led by the Rayagada Additional SP, carried out searches in Jajpur, Palasa, and Ganjam districts to trace the stolen gold jewellery. With the consistent efforts of Gunapur SDPO Ajay Kumar Barik, the police have been able to achieve great success in the recovery,” SP Sharma said.

It may be mentioned here that at around 9.30 am on 26th April, S Baba Prasad, owner of SS Jewellery, arrived at his shop, located in front of the Kanyaka Parmeshwari temple, in Gunupur. While he was calling his staff on phone to open the lock of the shop, two bike-borne miscreants reached the spot and snatched away the bag containing gold ornaments weighing around 3 kgs and a cash amount of Rs 2 lakhs.

On the basis of a complaint lodged by Mr. Prasad, Gunapur police registered a case (87/26.4.2022) and after scrutiny of CCTV footage, the police swung into action to trace the miscreants and after consistent efforts, the duo was nabbed.