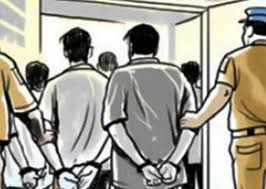 Acting on a tip-off, police conducted a raid and apprehended the four accused while they were planning to commit dacoity at the National Highway. The cops also seized cash Rs 21,000, eight bombs, four bikes, and chilly powder from their possession.

Reportedly, many criminal cases are pending against all the accused at different places in the district, said police.

A case has been registered under relevant sections of IPC and the accused have been forwarded to court, informed the police.