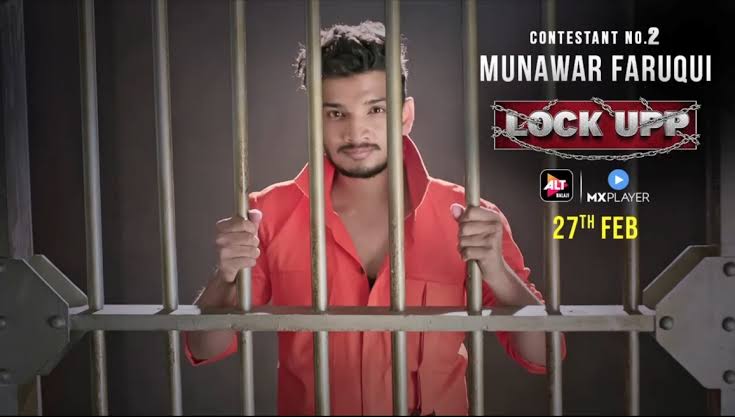 Mumbai: The makers of the highly-anticipated reality show, Lock Upp, hosted by Kangana Ranaut, have started revealing the names of their contestants. After announcing Nisha Rawal as the first contestant, it’s now confirmed that the second participant is none other than stand-up comedian Munawar Faruqui.

The new promo shows Munawar being locked up inside a jail by Kangana Ranaut on the charges of a “joke gone wrong”. ALTBalaji and MX Player will livestream this show 24×7 on their respective platforms and will have the audiences interact directly with the contestants, as per a note from the makers. However, Munawar Faruqui’s decision to be on the show has left the internet confused.

Munawar and Kangana come from two diverse ideologies and the comedian has often poked fun at the actress in the past. After he was released from jail last year, he tweeted, “Kangana ke tweets padke lag raha hai fir se judicial custody chala jaun!”

Commenting on his association with Lock Upp, Munawar said, “Lock Upp is going to be a one-of-its-kind show, as I believe it has the potential to change the dynamics of the content-viewing experience in the Indian OTT industry. Though it’s going to be a tough and challenging journey for me, I am glad that this show also gives me an opportunity to be myself in a real set up. I am glad to be associated with ALTBalaji, MX Player for offering me such a unique reality show.”

For the unversed, Munawar Faruqui made headlines last year after he was arrested by the Indore Police for allegedly hurting religious sentiments. He was put in jail for almost a month. Later in November, several of his shows were cancelled in Bengaluru amid protests by Hindu right-wing outfits. Following this, he announced quitting his career and wrote on social media, “Nafrat jeet gayi, artist haar gaya (hate has won, the artist has lost). I’m done, goodbye. Injustice (sic).”