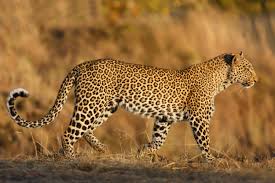 Nuapada: Presence and movement of a leopard near Haladi village under Khariar Road forest range in Nuapada district left residents of nearby localities panic-stricken.

According to available information, Forest department officials spotted the wild cat near Haladi village during patrolling.

It is being said that the movement of the animal towards the nearby forest was also detected by the locals.

Forest officials are attempting to trace the movement of the leopard. The villagers have been advised not to venture into the forest during the night.