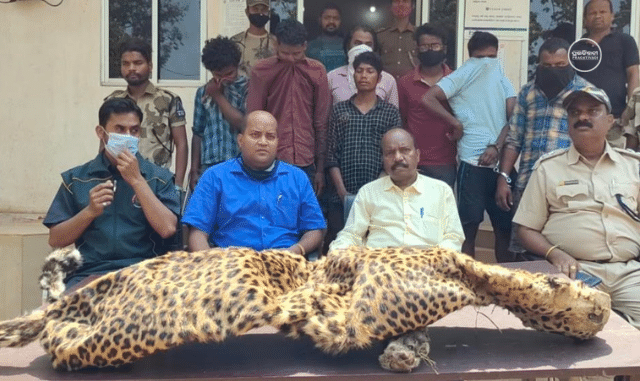 Karanjia: The Wildlife Crime Control Bureau along with the Odisha Forest Department has recovered a leopard skin in the Jashipur area of Mayurbhanj district and arrested seven persons including the prime accused.

Acting on a tip-off, a joint team conducted an operation on Tuesday and successfully apprehended two of the seven from Jashipur Old Bus Stand area in Dudhiani Forest Range under Karanjia forest division.

“The leopard skin is said to have been acquired from Kaptipada village under Pandapada police station under Keonjhar forest division, the forest officials said.

After receiving a tip-off about the poaching of a leopard and attempts to sell the skin, Bipin Kumar Chottpadhyay, an officer of the Madhya Pradesh Wildlife Crime Control Bureau, reached the Keonjhar forest division office.

A special task force, led by Chottpadhyay and assistant forest ranger Ghanashyam Mahanta conducted a raid at the old bus stand in Jashipur and apprehended Sanu Naik (23), and Mohammad Hasim (35), while they were attempting to sell the leopard hide.

The seized leopard skin is 4.5 feet in length and 2 feet 5 inches wide, the forest department said adding that all the seven accused have been forwarded to the court.

135 New CCTVs To Be Installed On Srimandir Premises