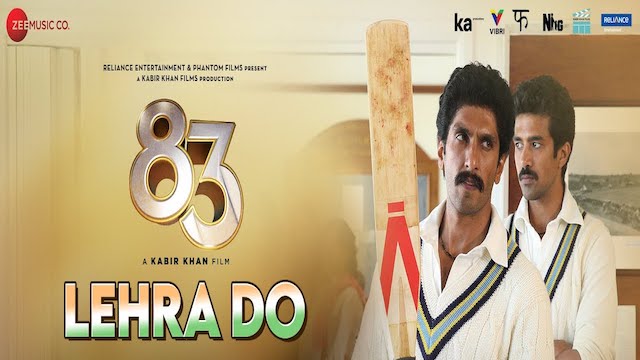 ‘Lehra Do’, The First Song From ’83’ Tells Fans’ Emotional Waft Towards Cricket

Bhubaneswar: One more feather of happiness added to the wings of all cricket fans after the first song from Ranveer Singh’s 83, titled Lehra Do, was released on Monday.

The music video opens with a heartbroken Indian cricket team as they lose one match after another, much to the disappointment of their fans.

Starting with Arijit Singh’s voice the song has a very emotional dialogue by a child as a young fan.
He says,”Main match dekhne nahi aaunga.. Papa kehtein he India kabhi jeet ti to hai nahi. (I won’t come to watch the next match as his father says the Indian team never wins.)”

Several glimpses of Deepika Padukone as Kapil Dev’s wife Romi Bhatia are also shown as she remains by his side during the testing times. Even Neena Gupta is seen for a moment as Kapil Dev’s mom.

Sharing the song, Ranveer wrote on Twitter, “Gear up for glory!” The energetic number has been sung by Arijit Singh and penned by Kausar Munir, with music by Pritam.

Directed by Kabir Khan, Ranveer Singh essays the role of Kapil Dev in 83, who was the captain of the Indian cricket team when it attained victory at the 1983 World Cup. Deepika Padukone plays the role of Kapil Dev’s wife, Romi Bhatia, in the film. The cast also features Saqib Saleem, Tahir Raj Bhasin, Ammy Virk, and Pankaj Tripathi, among others.