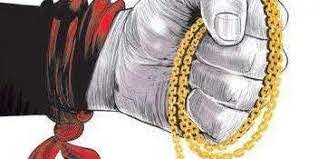 Bhubaneswar: A lady lecturer was looted in Bhubaneswar after miscreants diverted her driver’s attention towards ‘leaking lubricants’ from her vehicle.

The incident has been reported from near Tarini Vastralaya on the stretch between Rajmahal square and Kalpana square under the Laxmisagar Police limits here.

Reportedly, the miscreants garned the attention of the driver, Kailash Parida, by indicating that the car was leaking lubricant from the engine bay.

Once the driver stopped the car and opened the bonnet to check the problem, the miscreants came from behind and sprayed some liquid on the lecturer sitting in the rear seat before decamping with her purse which contained Rs 3000 cash, gold jewellery, a mobile phone and some important documents.

Following the loot, the lecturer informed the police control room about the same.