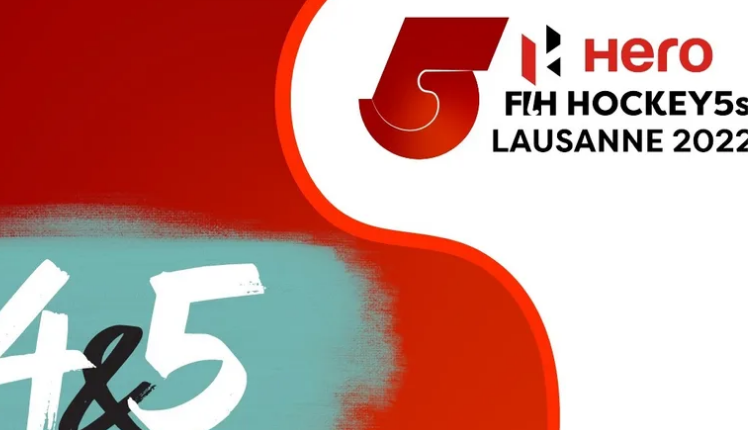 Lausanne All Set For Hockey5s Showcase

Lausanne: The Hero FIH Hockey5s Lausanne 2022 event is the first official senior World Hockey5s competition to be organised by FIH and it builds on the success of Hockey5s events that have been taking place across the world, including the Youth Olympic Games events in Nanjing 2014 and Buenos Aires 2018.

Taking place in the centre of the Olympic Capital Lausanne on June 4-5, Hockey5s Lausanne 2022 will be two days of hockey action, fun and entertainment.

The hockey action will see the men’s teams of India, Malaysia, Pakistan, Poland and Switzerland compete in a round robin style tournament, with a final between the two top teams.

Spectators at the event will be able to enjoy some amazingly fast and skilful hockey action. Hockey5s is a shorter, more intense style of play. A match comprises two halves of 10 minutes and the ball is in play for 90 per cent of that time, thanks to perimeter boards that the ball can be played off.

There should also be a glut of goals as players can shoot from anywhere in the attacking half.

This event, and the increasing number of Hockey5s events world wide is creating excitement among players and coaches. South African coach Tsoanelo Pholo said: ‘Hockey5s is an initiator into hockey, a developer into the full-field version. If you have a Hockey5s court in three or four places in the country, I am telling you now, we are going to have way more hockey players in developing countries.’

Swiss athlete Sae Fontana said: ‘As early adopters of Hockey5s, we want to gain a competitive advantage, to get better rapidly, as a small country. Hockey5s is a fast game which makes it intense for the players.’

There will be some superstars, both established and up and coming, showing their skills at the Place de la Navigation, near Lake Geneva.

For India men, Dilpreet Singh is an exciting young player who has already played for the national team 63 times. He and Sumit, who will also be in Lausanne, won a Bronze medal at the Tokyo Olympics last year! India men will be a leading contender for the title.

If Dilpreet is experienced with 63 caps, then Nabil Noor of Malaysia is a veritable veteran of the game. With 239 international appearances, the captain will look to lead his side of talented players to a first title.

Pakistan men led the way in the sport throughout the 20th century and it is exciting to see what this young team can do in a new format of the game. The speed and intensity will suit the super close skills of the Pakistan team.

Both Poland and Switzerland men’s teams will be looking to transfer some of the skills and tactics of the indoor game onto the court in Lausanne. Poland is a specialist when it comes to the short form of the game and Switzerland, led by Sebastian Schneider, will have the advantage of a home crowd.

In the women’s section, Uruguay will be bringing some South American flair to the hockey party. They will also bring a lot of experience, with Manuela Vilar leading the way. Elisa Civetta was one of the Uruguay stars of the Junior World Cup in April and will be keen to show her goal scoring abilities.

Like their male counterparts, Switzerland will enjoy a home crowd cheering them on. They are early adopters of Hockey5s and will relish this opportunity to star on the international stage.

Jade Mayne and Dirkie Chamberlain are veterans of the South African team and bring a wealth of experience. With a compelling mix of experienced and young players, the African challengers will be looking for a top of the podium finish.

Poland has the most overall experienced side at the competition and will be looking to use their indoor hockey skills and tactics to make a big impact in Lausanne. The Poland U18 team finished seventh in Buenos Aires at the 2018 Youth Olympics, so will be tapping into that experience too.

The fifth women’s team in Lausanne is India. Having enjoyed a silver medal performance in the Hockey5s in Buenos Aires in 2018 and a fourth place at the Tokyo Olympics 2020, India women will be determined to continue their upwards trajectory.