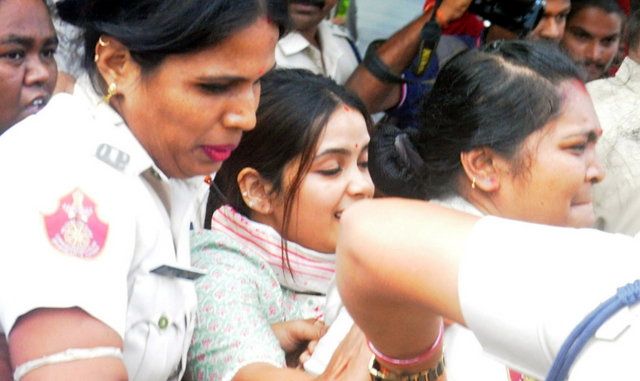 Lady Blackmailer Archana Nag Produced Before SDJM; Urges Media Not To Circulate Fake News About Her

Bhubaneswar: Lady blackmailer Archana Nag was produced in the SDJM court in Bhubaneswar on Wednesday in the second case registered against her with Nayapalli police station.

While being taken to the court, Nag urged the media persons not to broadcast news without facts and evidence. “The truth will come out as the investigation progresses and I will tell everything when the time comes,” she said.

In the second case of blackmailing, a complaint was filed in the Nayapalli police station, allegeing that Nag had demanded 3 crores from a filmmaker by threatening him with photos of his intimate moments. During the hearing in his case, Archana’s lawyer applied for bail. The SDJM has reserved the ruling in the second case.

In the first case in Khandagiri police station, it was alleged that he had blackmailed many bigwigs by taking their photographs of intimate moments with a young woman and extorting crores of rupees. Archana’s bail has been denied in this case too. Both the cases are being heard in the court of Bhubaneswar SDJM.

Archana Nag, the mysterious woman, appeared in the court of Bhubaneswar SDJM on Wednesday amid tight police security. Bhubaneswar SDM Court has reserved its verdict and posted the next hearing of the bail application on the 31st October.

Amid tight security, Commissionerate Police brought Archana from Jharpada jail to Bhubaneswar SDJM court. A cordon was placed around the police vehicle ferrying Archana. However, Archana, who came out of jail for the first time after her arrest, tried to say something to the media but before she could say much as the police hurriedly took her inside the court premises.

Soon after she got down from the police van, the media persons surrounded and bombarded her with all kinds of questions. In response, Archana said: “Don’t spread news without facts and evidence… I will tell you everything when the time comes. All the truth will come out during investigation…”