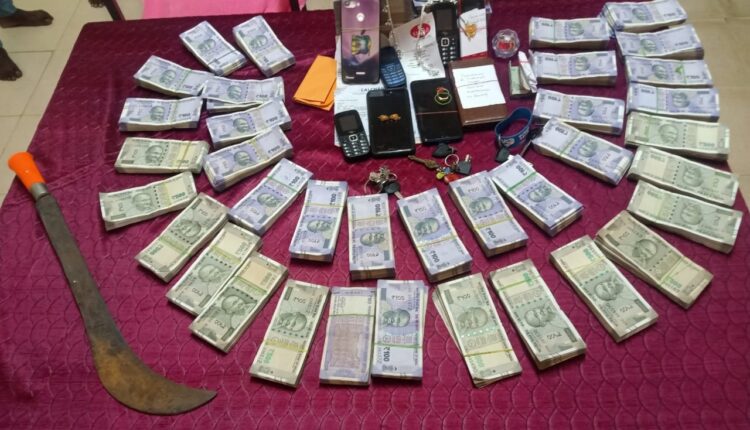 Sambalpur: Police here have claimed to solve the loot case of Rs 35.41 lakh from the employees of Union Bank, Laimura Branch, with the arrest of nine persons and recovery of Rs 10.09 lakh.

According to the case details, Asst manager Binit Kujur along with peon Sadashiv Bantha of Union Bank, Laimura Branch, after collecting Rs Rs 35.41 lakh was returning from Sambalpur. Meanwhile, two bike-borne miscreants intercepted their vehicle near Thuntipipal village. On being stopped, four more persons cordoned them and looted away the case amounting Rs 35,41,000 and the vehicle.

On being informed, a case (226/2020) was registered against the accused persons and 4 separate teams were constituted. After investigation, it was ascertained that a total of 11 persons were involved in the loot. However, police managed to apprehend 9 persons till now, while a manhunt has been launched to nab two others.

Besides,  Rs 10. 09 lakh in cash, 7 motorcycles, 1 Hyundai Verna Case, Gold & Silver ornament and few other items purchased from the looted money have been recovered from the possession of the accused persons.