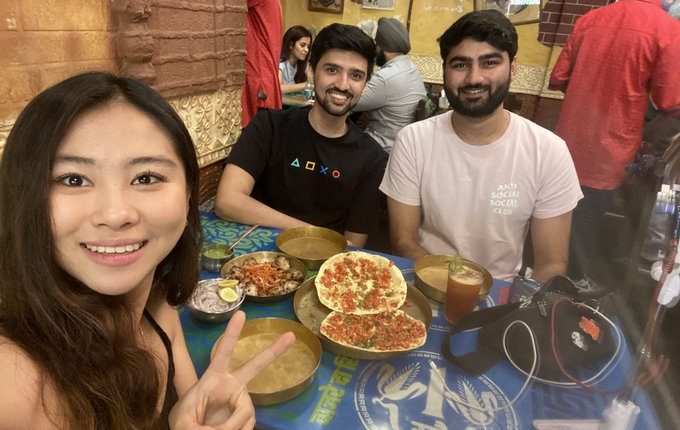 Mumbai: A day after two men were arrested for allegedly molesting and stalking a South Korean YouTuber on a street in Mumbai, on Friday a new video has gone viral on social media of the woman, Park Hyo-Jeong, in which a local man, identified as Atharva Tikkha, is seen coming forward to help her even as the accused continued to harass Park.

A Twitter user, Girish Alva, posted the video in which Tikkha is heard telling the woman that he saw her live stream and hurried to the scene. He is then purportedly seen speaking to the two accused and asking them not to harass the woman. The two accused eventually left.

Korean Youtuber was molested during live streaming, by Shaikh & Ansari in Mumbai. They were later arrested.

Here's what happened immediately after the incident.

One guy who was watching her live stream, came to rescue her. She thanked him saying "mumbai is pretty much safe" pic.twitter.com/1zmdTOBWbt

South Korean YouTuber Hyojeong Park has expressed her gratitude towards two young men who helped her out and “saved her on the street” and had lunch with them.

Taking to Twitter, Hyojeong on shared a snap from a restaurant with the two young men, whose names are identified from the caption as “Aditya” and “Atharva”.

Finally meeting with Indian heroes💜
Be my guess for the lunch today! pic.twitter.com/Um3lOeeciT

Lunch with two Indian gentlemen who help me to post the video and save me on the street👍
Aditya & Atharva pic.twitter.com/Cu9IYOjBMb

There was an outpouring of support for both the YouTuber and the two guys in the comments section.

“Aditya and Atharva is what India is all about. Kudos to the brave men,” a user wrote.

“Proud Of U Brothers,” another user wrote.

Park was harassed in Mumbai by two men while she was live-streaming on Thursday. The two youth, who had allegedly committed the crime in the Khar area of Mumbai, were sent to one-day police custody on the same day.

Taking suo motu cognizance of a video of the incident which went viral on social media, the Khar police registered a case under Section 354 of the Indian Penal Code (IPC) and arrested the accused.