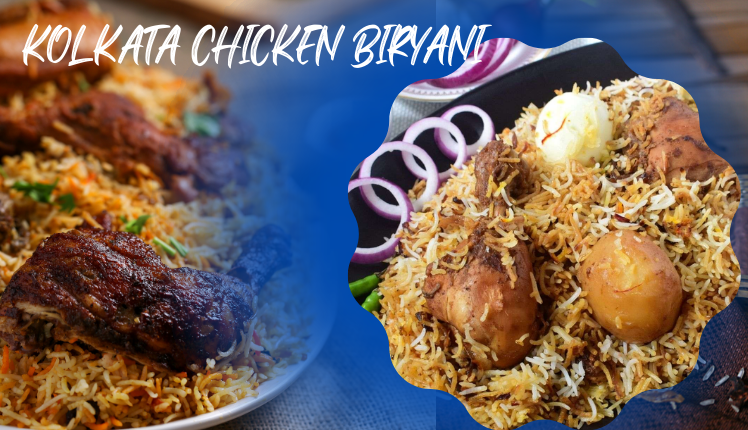 Kolkata chicken biryani recipe is the indulgence of delectability which is the amalgamation of authentic Bengali delicacy which tends to East India’s connection with the Gulf nations.

A perfect kolkata chicken biryani recipe can be accompanied on its own without any companion like raita or gravy like salan. It is mostly relished as lunch or dinner.

Kolkata biryani aka Bengali biryani first originated in the royal kitchen of Nawab of Awadh, Wajid Ali Shah, the last king of Lucknow. After losing his kingdom to the British, he was forced to leave Awadh and he came to Metiabruz in Kolkata with his employees and chefs. Soon Metiabruz developed to chota Lucknow.\

2. Mix well and set aside to marinate for 30 minutes

4. Fry the onions until golden brown then remove from heat

5. Cut potatoes in half and add to the pot along with salt, turmeric, and red chili powder

6. Fry the potatoes for 2 minutes and remove them from heat

9. Pour hot water over and toss the potatoes back in the pot

11. Cover with lid and cook for 20 minutes on low heat

12. In a separate pot, add cinnamon sticks in salted water along with cardamoms, bay leaves, shah jeera, and ginger

13. Let the spices steep for about 3 minutes then strain out of the water

14. Add basmati rice that has been soaked for 30 minutes

15. Cover with lid and cook for 5 minutes on high heat

16. Remove the lid and transfer the rice out and set aside

17. Add a hand full of fried onions to the chicken pot along with powdered milk and green chilies

18. Add the cooked rice on top of the chicken

21. Seal the pot with foil paper then cover with a lid

23. Remove from heat and gently mix before serving

Reasons Why Cashews Good For Your Health