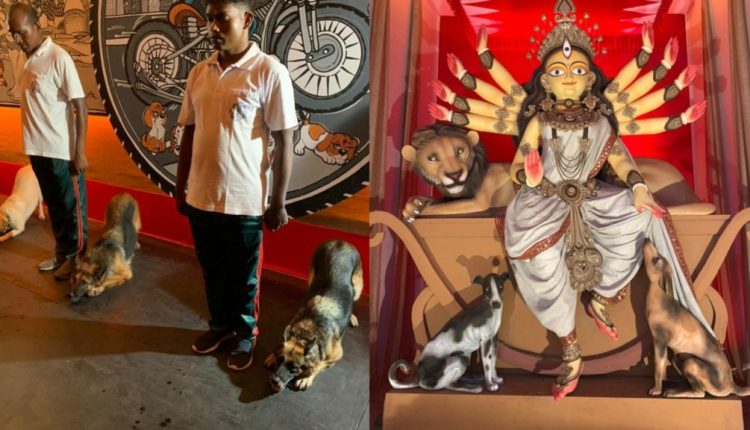 Kolkata: Bidhan Sarani Atlas Club is the first one to come up with a pet-friendly Durga Puja in Kolkata. And guess whom they invited as chief guests to inaugurate their pandal? 4 members of Kolkata Police’s Dog Squad.

The idol in this pandal features sculptures of two street dogs.

Highlighting the social issue of the treatment of street dogs, the pandal showcases the theme of ‘Shelter for pets’.

The ‘Asur’ in the idol has been replaced by two street dogs who are seen sitting at the feet of the idol (where the Asur is usually positioned), praying for shelter before the deity.

Meanwhile, the ‘Asur’ can be seen riding a bike and crushing some puppies under its wheel. It is a representation of people who hate pets and torture street dogs.

“We know that we have to face controversy over the idol but earlier the traditional Durga Idol used to have ten hands but now it has also changed. This social issue is important to show how street dogs are being treated. This year we have received the Cultural Heritage Award from UNESCO,” said secretary Biswajit Ghosh.