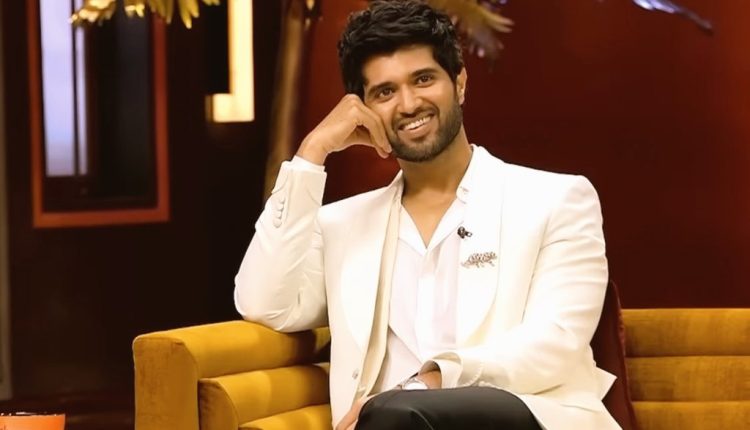 Mumbai: Vijay Deverakonda, who made his Koffee With Karan 7, managed to win the hamper for the Rapid Fire in the first go. As expected, there were a lot of cheesy conversations during the show.

About the cheese reference, KJo asked Vijay if he likes “cheese,’ cryptically referring to a previous episode where Janhvi Kapoor and Sara Ali Khan both confessed (well, almost) to having a crush on Vijay and went on to refer to him as “cheese” on the episode.

Vijay’s reply was this: “I am scared about where this is leading.” Vijay’s Liger co-star Ananya Panday added, “This was hunger games.” Vijay added, “They are really kind and sweet.”

When KJo asked the actor who does he find “more hot” among the two, he replied, “They are both attractive, young women.” He added that he has met Janhvi Kapoor a couple of times and said, “She is an adorable girl and I have met her a couple of times.”

During the Rapid Fire segment, the star was asked to name the most desirable woman in India. His reply was Samantha Ruth Prabhu. He was then asked to say a word that comes to his mind to describe a few celebrities. For Kushi co-star Samantha, Vijay said, “She is a darling. She is amazing. An incredible woman.” He described Sara Ali Khan as “witty and funny.” Asked to describe Janhvi, he said, “cute.”

During the episode, the two actors talked at length about their personal lives when Karan Johar asked Vijay about the rumours that he has been dating Pushpa: The Rise star Rashmika Mandanna.

Addressing the same, Vijay Deverakonda mentioned that he is ‘good friends’ with Rashmika and said, “We have done two films together at a really early stage in my life. She is a darling and I am really fond of her. We are really good friends. We share so much through films, lots of highs and lows. A bond gets created.”

Vijay also talked about why he never discloses his relationship status in public and said, “I will say it out loud; until then I would not like to hurt anyone who adores me. So many people love you as an actor and have your poster on their walls, on their phones. They give me so much love and appreciation; I don’t want to break their hearts.”

During the episode, Ananya recalled going on a dinner with her Liger co-star Vijay Deverakonda when Karan interrupted and asked if it was a date. To this, the actor said, “We went on a date, kind of. You looked pretty. I dressed up.”

“It was a friendly date,” Ananya added.

When Karan asked Vijay about his relationship status, the actor shared, “I am happy in life. I have a really good relationship with my parents, with my director, I love my dog.”

Meanwhile, Liger is the first time that Vijay Deverakonda and Ananya Panday will be sharing the screen. It will also be the first Indian movie in which Boxing legend Mike Tyson would appear in a cameo. In the film, Deverakonda will be playing the role of an MMA artist. In association with Puri connects, the film is being produced jointly by Karan Johar’s Dharma Productions. Liger will hit theatres on August 25 this year in Hindi, Telugu, Tamil, Kannada and Malayalam.

India schedule: When and Where to watch CWG 2022 Day 1 Telecast from Birmingham