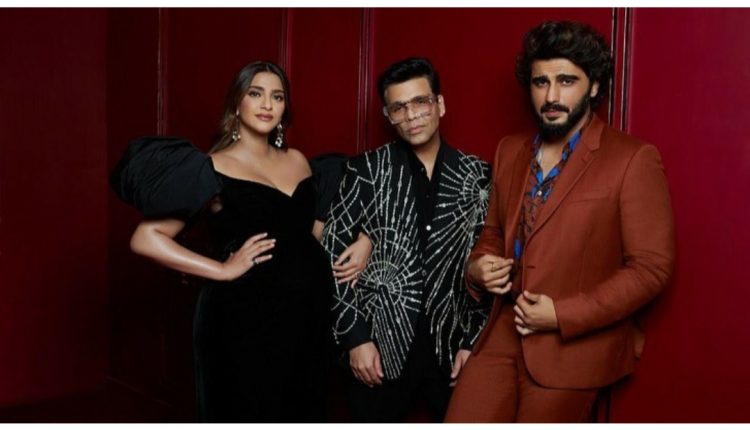 This marks Sonam’s first on-screen appearance after she announced her pregnancy with her husband Anand Ahuja earlier this year. This is not the first time that Arjun and Sonam are going to be part of Karan Johar’s show, in Season 5, Sonam accompanied pregnant Kareena Kapoor Khan and the Ishqzaade actor made an appearance.

The promo begins with Karan introducing Sonam and Arjun and saying, “Oh my god, I have S-N-M on the couch.” Later, Sonam asks Arjun about the most annoying thing about her. To which, the Ek Villain Returns actor says, “You don’t wait for anybody else to give you a compliment. You just give yourself a compliment, ‘Arjun, am I not looking good? Arjun, am I not looking gorgeous in this dress?'” Sonam says, “It comes from being Anil Kapoor’s daughter.” Arjun declares, “Sonam is back, ladies and gentlemen!”

Later, Sonam revealed that her brothers have slept with all her friends and that between them, ‘there’s no one left’. A shocked Arjun says, “What kind of sister are you? What are you saying about us?” He says that he feels that he is being called on the show to be trolled by Sonam. Arjun reveals that he likes his girlfriend Malaika Arora’s name and Sonam calls Ranbir Kapoor ‘the best’, “I am seeing his everywhere. He is promoting Ayan’s (Mukerji) film.” Karan asked her if she knew what it is called, and she fumbled, and called it “Shiva number 1.” To this, Arjun says, “You’re a mess, yaar Sonam.”

Sonam and Arjun’s Koffee With Karan season 7 episode will premiere on August 11.