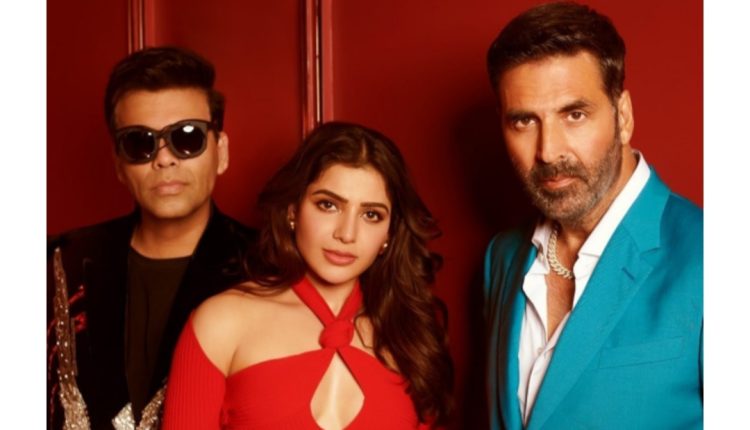 Mumbai: Karan Johar is back with Koffee With Karan and with it, a lot of entertainment and gossip is back. The third episode will see Akshay Kumar who has been a part of the show before along with Samantha Ruth Prabhu, who makes her debut on the couch this season. A recent promo of the episode that was shared on social media gives a glimpse of what the episode holds.

Akshay Kumar makes his entry in the third episode of the Hotstar Specials in true Khiladi fashion, carrying the show’s debutant Samantha Ruth Prabhu in his arms. Marking his third appearance on the show, he does what he has always done best – show who is the boss.

As Karan began to nudge Samantha into talking about her divorce, she roasted him instead. “You’re the reason for unhappy marriages,” she tells a shocked Karan while Akshay rejoices at having found a ‘jodidaar’ to take Karan’s case. Samantha was married to actor Chaitanya Akkineni. They announced divorce last year.

Recollecting the controversial Chris Rock-Will Smith Oscars slap, the iconic host Karan Johar candidly asks Akki, “What would you do if Chris Rock made a joke about Tina?” To this, the show veteran pragmatically replies, “I would pay for his funeral,” he says so while suggesting that no one gets to mess with Mrs Khiladi.

For Samantha Ruth Prabhu, the host cleverly weeded out her preference for the best dancer in the industry by asking, “If you had to host your best friend’s bachelor party, which two Bollywood hunk would you hire to dance?” to this, the leading lady in a heartbeat said, “Ranveer Singh, Ranveer Singh.”

Heart of gold and a dash of sexy & bold – my two new guests on the Koffee couch are bringing the heat this Thursday in an all new episode of #HotstarSpecials #KoffeeWithKaran S7 only on Disney+ Hotstar.@DisneyPlusHS @akshaykumar @Samanthaprabhu2 @apoorvamehta18 pic.twitter.com/i0tpm9l2K6

The episode will air on July 21.

The Premier League Is Back! And so are the fans. Top clubs’ business so far with top strikers