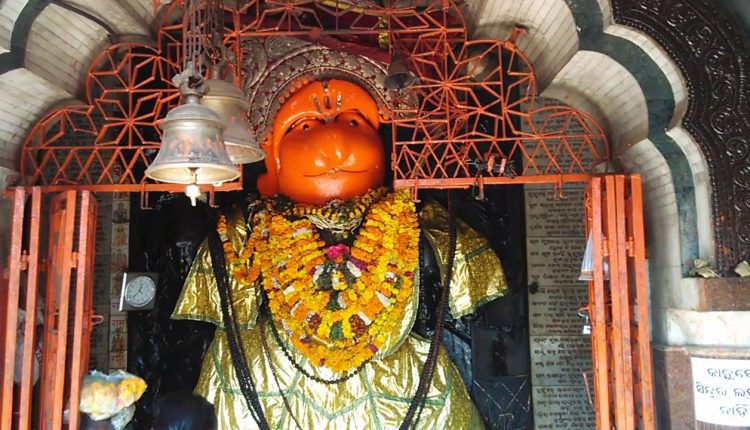 Puri: Hanuman is one of the central characters of the Hindu epic Ramayana and he is known for his strength, courage, selflessness and righteous conduct. Hanuman is also known as the greatest devotee of Lord Rama.

According to religious texts, Lord Jagannath is also considered as the incarnator of Shri Rama. So Hanuman, the greatest Rama-devotee, continues to protect the abode of Lord Jagannath as ‘Bedi Hanuman’ at Siruli in Odisha’s Puri. Located about 27 km northeast of Puri town, Siruli Mahavir is a small temple.

The idol is made of black chlorite and its height is about 10 feet. The deity exhibits Lord Rama and Sita in his pierced heart.

According to mythology, once the sea (Bay of Bengal) has damaged thrice to temple of Lord Jagannath, therefore he appointed Hanuman to protect the Puri and temple from the sea. Hanuman stood at ‘Chakra-Teerth’ to ensure that no damage is done by sea to the temple.

According to another mythological story, the supreme Lord Jagannath has accepted Mahalaxmi, the princess of the ocean king (Varuna Dev) as his wife and to see his son-in-law and daughter, Varuna Dev used to visit the grand temple many times.

As a result of which the holy land of ‘Sree Kshetra’ and the holy twenty-two steps leading to the main temple were flooded. The people of the holy land regularly suffered damages due to infiltration of the seawater and finding to another way they complained before Lord Jagannath.

After hearing the pleas of his people, Lord Jagannath who always appreciates the sentiments of his devotees and ordered Lord Hanuman to keep a close watch on the shore of the sea. Since then, the colossus Hanuman positioned himself like an alert guard.

The ‘Bedi Hanuman’ is also called “Daria (sea) Hanuman” as he saves Jagannath temple from the ravages of the sea.

Though the Bedi Hanuman temple does not hold much importance from the architectural point of view, from the religious angle, it is one of the most sacred shrines in Odisha.