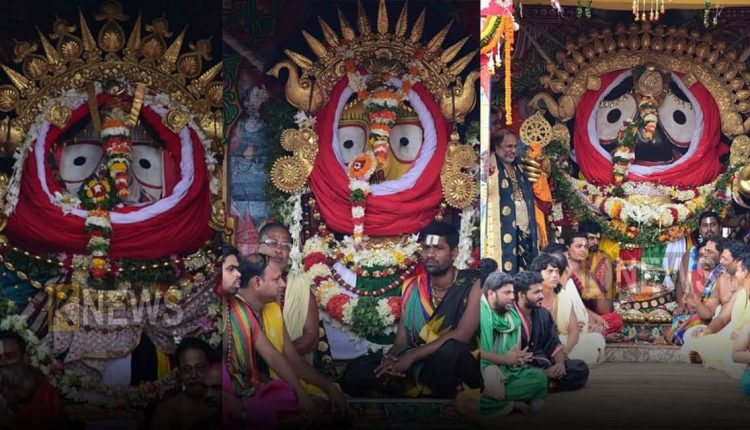 Know Why Holy Trinity Adorned With Golden Attire In Chariots

Puri: According to the necessities of his devotees, Lord Jagannath adopts several forms. In Jagannath Temple Puri, 32 Beshas (forms) which Lord Jagannath, Balabhadra, and Subhadra.

Suna Besha is one of the most looked upon by the Devotees as it is done in the great chariots. It is done on the 11th bright fortnight in Asadha.
Suna Besha is a special event of Jagannath rath yatra; when the Lord Jagannath, his elder brother Balabhadra and sister Subhadra Devi are decorated with gold jewellery. Suna Besha is also known as Rajadhiraja Bhesha or Raja Besha. It observed on the day after the return of the Deities from Gundicha Temple.
On the day of the 11th day of the bright fortnight in Asadha; the deities, on their chariots itself done the golden attire or the Suna Besha, with hands, arms and crown made of solid gold.

This form of God is put into action when the deities return from their visit to their aunt’s place. The chariots of the three Gods are kept in front of the Lion Gate of the Shri Jagannath Temple in Puri and there they are made to wear these ornaments.

The deities are adorned with gold jewellery five times in a year. While four such events take place inside the temple, one Suna Besha is held while the celestial siblings are on the gigantic wooden chariots in front of the Shrimandir.

It is believed that whoever sees the Lord in Suna Besha gets free of all his bad Karmas. A huge number of the crowd can be seen in front of the temple to feel the power of the Lord on this day.

As per the temple records, the ”Suna Besha” of the Lords is being held since the reign of King Kapilendra Deb in 1430. The deities wear glittering gold jewellery weighing nearly three quintals.

The ornaments are stored at Srimandir’s treasury called Ratna Bhandar. The king had earned the gold after defeating other kingdoms and deposited them with the temple. During Suna Besha ritual, Lord Jagannath is adorned with a Chakra made of gold in his right hand and a silver conch in his right hand. Lord Balabhadra is decorated with a gold plough in his left hand and silver mace in the right hand. Goddess Subhadra is decorated with an Emerald.