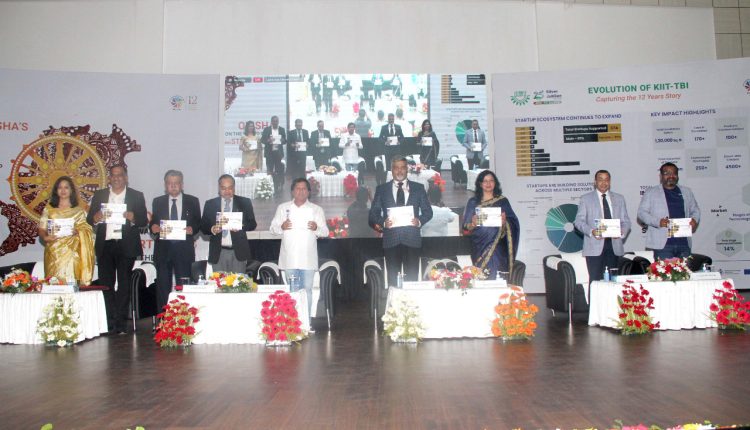 Bhubaneswar: Captains of successful start-ups, entrepreneurs, senior government officials and academic leaders on Friday converged at the KIIT-TBI organised Start-up Innovation Conclave 1.0 and highlighted the need to develop a vibrant ecosystem to promote and encourage budding talents to set up enterprises in the East and North-eastern part of the country.

The poster boy of the Indian start-up industry Gautam Kumar, the co-founder and COO of FarEye and a proud alumnus of KIIT Deemed-to-be-University, emphasised developing ideas and businesses that touch all segments of society. He expressed his heartfelt gratitude to KIIT and KISS Founder Dr Achyuta Samanta, who was present at the event, for extending financial support to his idea and venture that has gone on to become a unicorn today.

Vice Chancellor of KIIT DU Prof Sasmita Samanta said that when Gautam had approached the university for financial assistance to the tune of Rs 25 lakh, the Founder did not hesitate once to extend support to him as he values and promotes entrepreneurship.

The two-day event is being organised as part of the ongoing Silver Jubilee Celebrations of KIIT.

Union Secretary in the Ministry of the Development of North Eastern Region (DoNER) Lok Ranjan made a spirited appeal for setting up enterprises in the Northeastern region and said that the general perception that start-ups cannot be developed in this part of the country needs to be set aside.

“Our vision in the northeast is to have a transformative impact in the region through development. We will focus on infra, health, education, and primary sector development through entrepreneurship,” he said.

A short video clip was played during his address following which the Secretary said that the presentation gives an idea about the challenges that can be converted into opportunities.

Secretary, Technology Development Board (TDB) Rajesh Kumar Pathak said the challenge before him is to set up the ecosystem in smaller towns to support entrepreneurship and start-ups that are mostly concentrated in big cities such as Bengaluru, Hyderabad and Gurugram. He announced that one of the proposals supported by them will soon become a reality as the start-up will produce malaria vaccine for the world in Bhubaneswar soon.

Former Secretary TBI H K Mittal, who has been a regular visitor to the KIIT campus, hailed the achievements of KIIT-TBI for being the premier centres of its kind in the country and successfully creating hundreds of start-ups in the country.

Director General of Entrepreneurship Development Institute of India (EDII) Ahmedabad Sunil Shukla underscored the need to develop an entrepreneurial mindset in the country and shared a study of his institute which revealed that 52 percent of aspiring minds lack the confidence to take their venture ahead. However, the study also revealed that there has been a 15 percent increase this year while capturing the engagement of people towards entrepreneurship. This has reduced to only 5 per cent during the Covid phase.

Dr Samanta, on the other hand, encouraged budding entrepreneurs to take up challenges to be successful in the venture. He said that KIIT is a shining example of successful entrepreneurship. KIIT’s sister concern KISS, he said the largest university worldwide for tribal students and has won UNESCO’s highest literacy honour.